by Sikhizm
in Hukamnama, Translation
0 Because this was the place where Aad Sri Guru Granth Sahib was first edited by Sri Guru Arjan Dev Ji, Hukam taken here has become of supreme value to the entire Sikh Congregation. However, Hukamnama is what is passed to a Sikh from any Sarup of Sri Guru Granth Sahib, whatever Gurudwara Sahib he is attending at that time.

You can read Mukhwak in three languages Gurmukhi, English, and Hindi with Translations and Transliterations. We include a beautifully designed Gurbani Wallpaper written Mukhwak on it, Hukamnama PDF to Download released by SGPC, Amritsar. 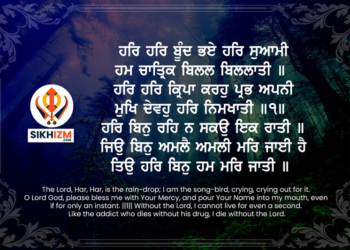 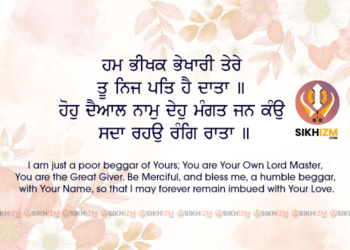 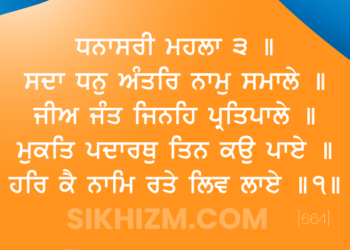 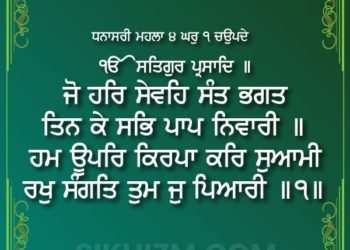 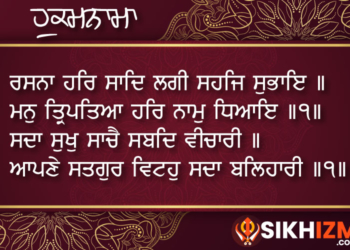 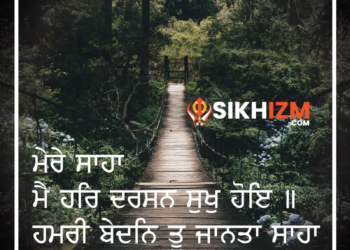 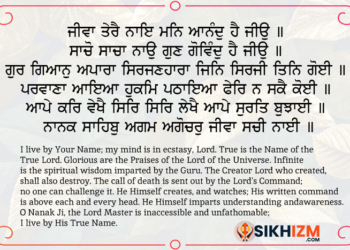 Sahib Shri Guru Granth Sahib is installed at the highest level in a Sikh’s beliefs. Religious services of true Sikhs or Gurmukhs are constructed of

Hukamnama from Darbar Sahib, Harmandir Sahib, Amritsar has become popular in recent years because it is aired globally via TV and other digital platforms. Darbar Sahib is closest to the heart of Sikhs because the Adi Granth was first composed here.

Hukamnama is composed of two Persian words Hukm and Namah. Hukam means Command or Order and Namah means Letter, which entirely defines the Hukamnama as a ‘Letter of command’.

The presence of the Adi Granth is mandatory at important religious ceremonies. Before the culmination of a service, it is opened by the granthi at random, and the first hymn on the left-hand page is read out to the Sangat, this reading is called the Amrit Vele da Hukamnama (guru’s order for the day), and it signifies the culmination of the service, with the authority of the guru as personified by the Adi Granth.

The second one is known as ‘Sandhya Vele Da Hukamnama’ which is taken while opening Sahib Shri Guru Granth Sahib in the evening path.

Sahib word is used to honor everything which is religiously sacred in Sikhism. For example, we use Sahib words with the places like Amritsar Sahib, Sri Patna Sahib, Sri Anandpur Sahib, etc. to respect the relations of these cities with Gurus. As no other thing is sacred more than the Hukam of Guru to a Sikh, we read the pious Hukams with the name ‘Hukamnama Sahib‘.

The literal meaning of Mukhwak is “Mukh” i.e. Chief and ‘Wak’ i.e. Sentence. So it is a synonym for ‘Hukamnama Sahib’. It is also spelled as Mukh-Vaak and Mukh Vak.

A hukamnama is, in fact, a letter of command or instruction written by the Sikh Gurus to Sikh Sangat or prominent Sikhs. Guru Tegh Bahadur called his letter a hukamnama. But the hukamnamas collected in these works do not belong only to this category.

Literally, Hukamnamas were documents sent from the time of Guru Hargobind to Sangats or individuals, giving instructions or requesting assistance. The Hukamnamas are an important source of Sikh history.

From the very beginning, a tremendous amount of religious importance has been attached to the Hukamnamas issued by the Sikh Gurus. These Hukamnamas were both received and obeyed with great religious fervor and respect by the Sikh congregations assembled in the Gurudwaras to whom they were addressed and read out aloud.

Sikhs considered adherence to these Hukamnamas as their religious duty. The Hukamnamas were issued for a variety of reasons from time to time, such as those relating to the Guru’s kitchen, donations to run religious centers, etc. As Shri Guru Granth Sahib is the present master of every Sikh, Everyone should follow the words of Guru Granth Sahib Ji which we get in the form of Daily Hukamnamas.

If you're looking for Mukhwak from Darbar Sri Harmandir Sahib, the Holiest shrine of Sikhism in Amritsar, then you've landed at the perfect place. Read Hukamnama in Original Text, and with Hindi-English Translation, Beautifully Designed Graphics, and PDF Files to store in your local memory.