'Book' is not an appropriate word for Guru Granth Sahib, because it is 'Living Guru' in Sikh Traditions. Guru Granth Sahib is not only a Holy Book of Sikhs but a ‘Living Embodiment of the Gurus’ for them. 10th Sikh Guru Gobind Singh breathed his last on October 7, 1108. When the Sikhs asked him who their Guru would be in the future, he said, “The Word is the spiritual Guru as contained in the Adi Granth: the secular Guru is the Panth or the whole Khalsa-in-faith,” Thus was democracy forever established in the spiritual as well as the social domains by the tenth Master.

The Guru Granth Sahib was compiled by the fifth Sikh Guru, Arjun, in 1604 A.D. He already had before him the hymns of his four predecessors collected and put to writing by the second and the third Sikh Gurus. The latter had even added some of the popular sayings of the Hindu Bhaktas and Muslim Sufis as well.

Assembled in two volumes, the manuscripts lay with Baba Mohan, son of Guru Amar Das, the third Sikh Guru. From him, Guru Arjun procured these after some hard persuasion, as the holy Granth itself testifies. Some writings of the Gurus were collected from other sources as well, and the whole was put to writing, after a good deal of judicious pruning to separate the apocryphal writings, by Bhai Gurdas, a disciple of the Gurus, under the direct supervision of Guru Arjun himself. Bhai Gurdas Ji was also the maternal uncle of the 5th Guru.

Guru Gobind Singh, the tenth and the last Sikh Guru, added some of the sayings of his father, Guru Tegh Bahadur Ji, to the volume (and possibly One couplet of his own). And this whole has come down to us in its original purity.

This then is the only scripture of the world which was compiled by one of the founders of religion himself and whose authenticity has never been questioned.

The Granth, as we find it today, is arranged not subject-wise, but according to the musical measure in which a hymn is meant to be sung. There are in all 31 such measures (or ragas), namely, Sri, Majh, Gauri, Asa, Gujri, Devgandhari, Bihagarha, Vadahans, Sorath, Dhanasri, Jaitsiri; Todi, Bairari, Tilang, Suhi, Bilawal, Gound, Ramkali, Natnarain, Mali Gaura, Maru, Tukhari, Kedara, Bhairo, Basant; Sarang; Malhar, Kaanra, Kalyan, Parbhati and Jaijaivanti. As would be seen from the above catalog, the Gurus rejected the measures which were expressive of excessive exuberance or unalloyed sadness.

Authors of All Faiths

Most of the Sikh Gurus were themselves great musicians, masters of the classical style. We are aware that Guru Nanak always kept the company of a Muslim Rabaabi, Mardana, who played on the rebeck while Nanak sang to large audiences.

Mardana’s descendants, who still keep to the Muslim faith, are the most honored of the musicians who sing to Sikh audiences to this day the Word of the Guru in some of the best-known Sikh temples. Guru Arjun himself was a great vocalist and an instrumentalist. And, as the whole Granth is written in poetry of the highest order, both music and poetry have formed an inseparable part of the Sikh ritual and the Sikh cultural pattern and run through the blood of every man and woman of this aesthetic faith.

The Granth contains, besides the writings of the Sikh Gurus, compositions of almost all the medieval Hindu Bhaktas, like Kabir, Ramanand, Ravidas, Surdas, Sain, and Bhikhan from the U.P.; Jaidev from Bengal; Namdev, Trilochan and Parmanand from Maharashtra; Pipa and Dhanna from Rajasthan; and Beni, then popular all over North India.

The writings of five Muslims-Baba Farid, Bhikhan, Satta, Balvand, and Mardana are also incorporated in the Granth. Baba Farid, Ganj-i-Shakar, it may be noted, was a great Muslim divine of the thirteenth century A.D. who did much to spread the gospel of Islam in India.

No other religion has perhaps shown this catholicity of outlook in bringing together views of such diverse hues and even when they are diametrically opposed to the tenets of the faith of whose scripture they now form an integral part.

This whole book, now worshipped by the Sikhs the world over as the “living embodiment of the Gurus”, as enjoined by Guru Gobind Singh, is the Scripture of the Sikhs, and the expungement of any portion thereof is considered sacrilegious. Some attempts were made by devout Sikhs in the present time as well as in the past either to expunge the hymns of the Bhaktas or to separate the Guru’s Word from theirs, but every time an attempt was made, it was frustrated by the whole might of the community against this unholy endeavor.

Here is then democracy in religion at its best. Undoubtedly, the Gurus, when they felt inclined to disagree with a Bhakta, put in beside their own views unmistakably, but they never for once, criticized either the Muslim way of worship as such, which Farid advocated, or the worship of Rama and Krishna which some of the Hindu Bhaktas advocate with such passion in the holy Granth, although the Sikh Gurus themselves disavowed belief in the incarnation of God and idol-worship.

It may be remarked here in passing that the Bhaktas, whose works were included in the Guru Granth Sahib, belonged, more often than not, to the lower classes of society. Kabir, for instance, was a weaver; Namdeva – a calico-printer; Dhanna, a cultivator; Sadhna – a butcher; Ravidas – a shoemaker; Sain – a barber; though Pipa was a king and Trilochan, a Brahmin. But the emphasis’ in the Granth’ is on the lowest becoming the highest and caste being of no consequence in the realization of the Supreme Truth.

The arrangement ·of the Granth is as follows :

First comes Guru Nanak’s Jap, the Sikh morning prayer, followed by nine hymns repeated later in the Granth in Ragas Asa and Gujri, which are sung in the evening. Then follow extracts from Ragas Gauri, Asa, and Dhanasri, which are recited before retiring to bed. Then follow verses in 31 Ragas which form the main body of the Granth.

The piece called Mundavni is the concluding chapter of the spiritual portion of the Granth. The tail-piece, called Ragmala, a catalog of the Ragas and their families, is also read by the devout Sikhs, though its authorship (which some ascribe to Alam, a Muslim contemporary poet of Guru Arjun) is still in dispute.

There is not a meter known to Indian prosody that was not employed by the Gurus. But innumerable variations have been introduced into them to make them more musical and to make their lyrical note more intense. Even verse-libre and blank verse have also been experimented with, for the first time, I should suppose, in any vernacular of India.

The language of the Granth has now more or less become archaic, though at the time it was employed, it was the only accepted vehicle of literary expression. It is generally supposed that the language of the Granth is pure Panjabi. In places, it undoubtedly is so, in all its varieties – Lehndi (western), central, and Poorbi (eastern). But by far the largest portion of the Granth is composed in a mixed language, which for want of a better term, we may call Hindvi, a mixture of western Hindi, Prakrit, Braj, Panjabi, and the then-current vocabulary of Persian and Arabic.

So, not only in subject matter, or religious affiliations of its authors but also in language, the Granth upholds the creed of synthesis against exclusiveness of form, symbols, and ideas. Similarly, in art and architecture, music, a system of Government, dress, and diet, the Sikh movement led to the synthesis of various schools of thought and it would be safe to venture an opinion that in the evolution of Urdu, the Indo-Saracenic school of architecture and the Din-i-Ilahi of Akbar the Great, the Sikh movement had played a most noteworthy part. As students of history are aware, Akbar was a great admirer of the Guru and came personally to pay his homage at the Guru’s Court.

The Granth, as Dr. Trumpp has said, “is the treasury of the old Hindvi dialects”. Besides, it is a sourcebook for compiling a socio-cultural history of North India in medieval times. Its idioms and proverbs have become the stock-in-trade of every Panjabi for all occasions, no matter what his religion, profession, or place of residence.

The poetry of the Guru Granth Sahib sings in symbols. But, the metaphor of the Granth is homely and direct, such as one would Come across in the daily run of one’s life. And yet, the word, sound, and idea pictures, in which the poetry of the Granth abounds, create such a perfect atmosphere of harmony between the subject matter and its form that it defies every attempt at translation.

No wonder the Granth has remained untranslated so far, in major parts, in any foreign language, in spite of the crude attempt of Dr. Ernest Trumpp, a German missionary, in 1870 to render certain portions into English on behalf of the Government of India and of the genuine, though literal, rendering of the selected verses of the Granth by Mr. M.A. Macauliffe in his “Sikh Religion” (published in 1909). The first complete English translation of the Guru Granth Sahib was done by Dr. Gopal Singh, M.A., Ph.D. in 1960.

The confusion of interpretation of Guru Granth Sahib has occurred because the Sikhs themselves, for historical and other reasons, have never seriously’ attempted a scientific and cogent exposition of the doctrines of their faith, based on the Word of the Guru Granth Sahib and related to the historical lives of the Gurus who uttered it.

Without reference either to one or the other, casual attempts made at the interpretation of small portions of the Granth have resulted in such interpretations being incoherent, lop-sided, and therefore unreliable During the present century, several attempts were made by the Sikhs to translate into Panjabi the Word of the Guru, but all such attempts ended in an all-too-literal translation, leaving the seeker as uninitiated to the Guru’s Word as he was before.

And the word of the Guru Granth Sahib became as involved and distant for an average reader as the Word of the Vedas, and it started to be worshipped more than reading, uttered as a magic formula or a Mantram for secular benefit than as a discipline of spiritual life for the achievement of ideals higher and beyond the world of sense and for the integrity of mind and soul in the world of the living.

The language of the Guru Granth Sahib is becoming archaic for the present-day reader if it has not become so already. It is written in a script that is confined to Punjab. Till recently, the words of the Guru Granth Sahib even in print could not be separated one from the other so its correct reading was restricted to a select few. And but for a few individuals, it has never occurred to the community to define its basic tenets, and to answer the seeming contradictions in these tenets, in short, to attempt an integrated account of the Sikh view of life.

Two notable attempts were made in this direction by two Europeans, Dr. Ernest Trumpp, and Mr. M.A. Macauliffe. But the former was too casual to have studied the Guru Granth Sahib seriously, and so he not only mistranslated the portions of the Granth which he attempted but also dismissed its study as of little consequence to a student of religion. The latter only confined himself to the biographies of the Sikh Gurus and made only such occasional use of the Word of the Guru Granth Sahib, where it supported a particular thesis. No attempt was made by him to interpret the Sikh credo, and he emphasized only the historical aspect of it, as it evolved from a pacifist creed to the militant’ brotherhood of the Khalsa. 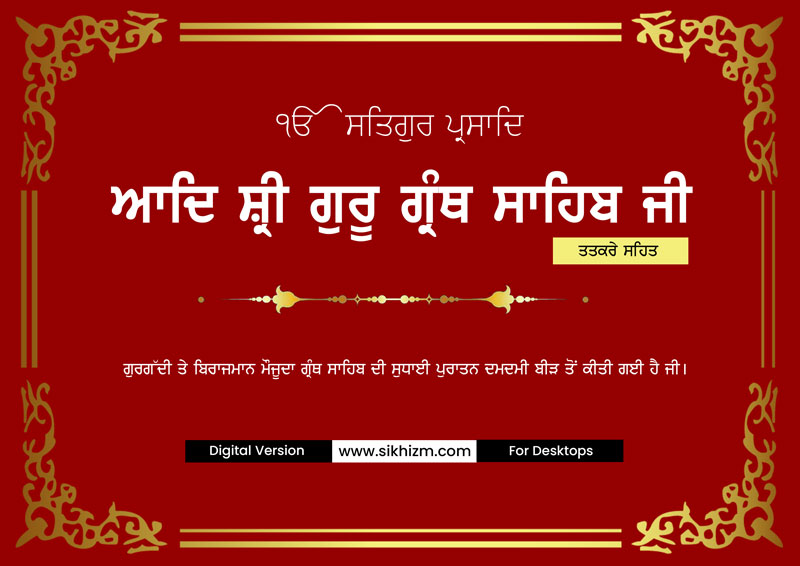