2022 marks the 277th anniversary of Bhai Taru Singh Ji Shaheedi. The one who accepts death for the good of religion, nation, and humanity is called the martyr. Sikh history is the valuable treasure of such martyrs. The foundation of Sikhism is placed on sacrifices, and this phrase is not an exaggeration.

Martyrdom in Sikhism began with Kaji Rukn-ud-din at the time of Guru Nanak Sahib followed by Guru Arjan Dev, Guru Tegh Bahadur, and thereafter the names are countless.

During his youth, he used to treat wounded Singhs and Mughal soldiers on the battlefield. He took food daily to the Singhs that were hiding in the jungle. In an incident, Bhai Taru Singh helped a Muslim Rahim Bakhsh to get his sister back from the captivity of Zakriya Khan allying with Khalsa warriors. After hearing this Zakariya Khan arrested him, and tortured him for many days to forcibly convert him into Islam. At last, he was martyred by scraping his scalp. Nobel laureate Rabindranath Tagore in one of his poems dedicated to Bhai Taru Singh Ji, writes

When the Pathans brought them chained
All in calm they remained
The captive Sikhs – though at Sahidgunj town
With their comrades’ blood, the soil was brown.
Says the Nawab, “Look, Taru Singh –
I want to forgive you without misgiving.”
Says Taru, “Why for me so much slight?”
Nawab says, “A great warrior you are
That you proved in your fight;
So, to you I bear no anger;
Only I beg of you the gift of your Beni*
And you will be spared harm any.”
Taru replied, “I owe you as your mercy’s nominee;
So offer a bit more, my head with my Beni*

* Note by Tagore: “To shave off Beni is as good as forsaking religion for a Sikh”. “Beni” in Bengali means the coiled hair the Sikhs keep. 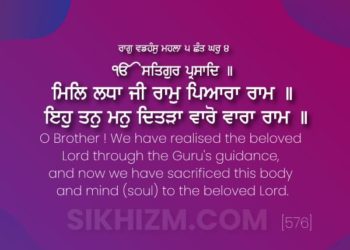