Sukhmani is the most popular and widely chanted hymn. It is joy infinite which is beyond the span of words; for words are volatile, but the joy which emanates from this Song of songs is eternal. 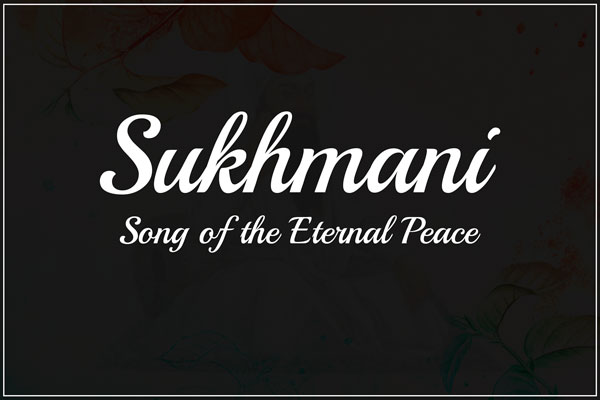 I lay on my bed “of illness and I asked myself :

“What is the deepest need of my heart ?” And I answered : “Spiritual peace”.

Then I thought of the great scriptures of the Hindu faith, each sounding the note of peace, “Om shanti, shanti, shanti, the great mantra of the Rishis. And my thoughts travelled to another scripture written by a saint, the scripture named Sukhmani. The word means ‘the jewel of Sukh, or peace”. Sukhmani is a “Song of Peace”.

A great message this — of Guru Arjan Dev— which has not received the attention it deserves. The age we live in cries, on the political plane for peace of the nations. But life transcends politics. Above the political plane is another, the plane of communion. And there the deepest yearning of the heart of men is for spiritual peace.

One of the great voices of this Sukh, peace, spiritual, peace, is Guru Arjan Dev who passed away in the 16th century. He died a martyr’s death, he died with the great word, “Nanak” (his Master) and peace”, on his lips. He died a martyr, a witness to the Life in the Spirit! Guru Arjan Dev Ji was, perhaps, the greatest man of this century, and these four centuries more he has been one of the dominant figures in the history of India.

His influence on the life of the Sikhs has been tremendous. He is a many-sided figure. Sometimes, we see him as an organizer of the Sikh Community, giving them a Scripture, Granth Sahib, and a temple, the inspired author of the Sukhmani. Again, as a preacher of a school of spirituality in which the Hindu embraces the Muslim as his brother, a school of which Guru Nanak became a Prophet when in Kartarpur he greeted the Khalifa and the Pathan as comrades, dining in the same kitchen and worshipping in the same Temple, the one Eternal Akal Purakha named at once as Sat and Allah or Khuda.

I am not a Sikh. But in my heart is an aspiration that Sikh scholars and bhaktas may be banded together
(1) to present in a book, a whole and integral picture of Guru Arjan Dev, and
(2) to translate into English and some of the important Indian vernaculars Guru Arjan Dev’s Sukhmani, a Scripture which has, I believe, a world value.

The Sukhmani should have a special appeal to the nations which, broken and bleeding today cry for peace, which is not a political parchment but is born of the Heart of Man.

Guru Arjan was a man of interior solitude and prayer, and he was a man of heroic action. In his life was the union of action and contemplation. In this union is the true integral life of saints. Reading the Sukhmani and meditation on it, we may hope for a return to the true integral spirit, which modern India has, alas! forsaken. ‘ The teaching of Guru Arjan should receive wide dissemination in these days, for the Sukhmani indicates how activity may be nourished by interior life, and how social life may bear fruit not merely in improvements in service of one’s own community but in true love for all communities.

St. John of the Cross speaks of the “Dark Night” in which is revealed the Light of the Spirit. Such a “Dark Night” we see in the life of Guru Arjan Dev when he is seated on an iron plate, hot flames burning underneath and the great Guru reciting the word of his Guru, of Nanak Dev, and repeating the words: “In Thy Will is the peace of my soul!” Guru Arjan Dev of the Dark Night is a symbol, to my mind, of the Khalsa Community, enduring, suffering, bearing witness to God in the trials of life, glorifying the Gurus. Guru Arjan Dev shares his agony with Sikh martyrs.

Sukhmani is the great Guru’s Book of Poems. They are psalms of peace, spiritual peace. They sum up the whole teaching of the ten Gurus and have for these four centuries and more, consoled the hearts of men and women. Shlokas of Sukhmani have healed; taught; illumined and have been chanted day and by night. I know of men and women who have lived on them and entered into the lives of thousands. I have heard the chant at midnight and again in the dawn.

The psalms of Sukhmani are on the lips of the peasants in the field and the laborers in the factory, of the students in the school, the youths in the city, the bereaved, and the broken. They have been food and nourishment of many hearts. In them is the great word of the Gurus, the Word of God. The Word has nourished the hearts of millions.

The very first Canto of the Book opens with the words :

‘Meditate, meditate, meditate on Him and attain to Sukha.” What is Sukha ? The Upanishad used the word ananda. Both mean “joy”, “bliss” Both points to peace. All of us seek peace, joy, bliss. Even those who say they do not believe in God, seek Sukham, peace. And what must they do to find Sukham? They must “meditate” in silence; only so may they have an experience of peace in His presence.

Life is a search for peace, for Sukham. All pain born of Parkirti (the body), all matter born suffering Vanishes when you meditate on the One. Conquer Prakriti to attain Sukham. Conquer Prakriti and enter into the Spirit, the One Nama. This entrance into Nama does not mean that you renounce the world. No! In meditating on the Nama, the spirit you rather understand the world better.

Example of a Farmer

There was a farmer. He worked in the field by day: on his lips was Nama. Who realized better than he the value, the dignity, and nobility of manual labor? “Labour,” he said, “is worship !” And in all his work, he worshipped God. And his face glowed with beauty. Does not Sukhmani say, “He who remembers God wears a face kindled with beauty?”

Such a man indeed is full of love. He will not argue about spirituality. He realizes that life is meant for the love of God. Through love, bhakti, he mounts to knowledge. The farmer, I referred to, seldom talked of God. He never argued. He reflected love in his actions and chanted the Name of God, chanted slokas from Sant bani. And his very silence was a chant of the Holy Name.

He worked; he did his duty, each day, and every fragment of his work reflected love. And seeing him, I said: “this poor, humble peasant shows how work may become a prayer, a link of our hearts and minds with the Presence of the Living God”. Here was a single man of meditation, who did not merely say prayers, he lived prayers, he was prayer personified! This farmer tilled the soul and his tilling was service of God.

Some passages from the psalms of the Sukhmani, I have sung, again and again, and have felt that a wonder has suddenly opened, and through the song of the Sukhmani, I have gazed at His Face. The pauris of the Sukhmani have proved to be steps to contemplation, steps on which I have ascended to receive free gifts of God, His revelation. Let me but chant the pauris in faith and each Pauri becomes a window through which He is beholden in a form of beauty. This beholding is the end of Simran. I meditate in order to see, to contemplate. And seeing I go forth into the valley of the shadow, the valley of Maya, of action to serve the Will Divine.

Scripture of a Saint

The Sukhmani is the scripture of a saint whose sanctity entered into conflict with a king, proud of power arid domination. The conflict ended in tragedy, the saint sacrificed his life and would not surrender God and the Granth Sahib. The great king Akbar, paid homage to the Granth, saying that it was full of praises for the Divine Maker and as a mark of his appreciation, sent several golden muhars to be spent in the service of the people. Akbar died in 1605. Akbar was succeeded by Jehangir, who did not understand the noble ideals for which Guru Arjan and the Granth Sahib stood.

The Granth Sahib is Scripture of Union, a Melap-Sastra. In it are brought together sayings and songs of Hindu and Muslim lovers of God. Jehangir asked Guru Arjan to make changes in the Granth. Guru Arjan declined to do anything to suit the fancies of a king and was summoned to Lahore. There he was ordered to sit for three ‘days in a cauldron of boiling water which became hotter and hotter, as the flames underneath burnt, more and more, and_ red hot powder of sand was applied to the Guru’s blistered body. In calm dignity set the Guru, reciting from the Japji and repeating the words:

‘Sweet to me is what Thou doest!
I but ask of Thee the Treasure of the Name.’

The Spokesman Weekly published this article on Sukhmani Sahib originally back in 1980. As it describes the views of a Great educationist and Saint Sadhu T.L. Vaswani on Gurbani, We have re-published it as is here with little change in its title only.

Blessed to Read Opinions of a Hindu on Sukhmani Sahib

Sadhu Thanwardas Lilaram Vaswani was an Indian educationist and great scholar. I am glad to read this beautiful article by him, in which he had expressed his views on Guru Arjan Dev Ji and his creation Sukhmani Sahib.