Battle of Kasur was fought between Khalsa army of Maharaja Ranjit Singh and Kasuria Pathan lead by Qutub-ud-din Khan followed by Nizam-ud-din Khan. 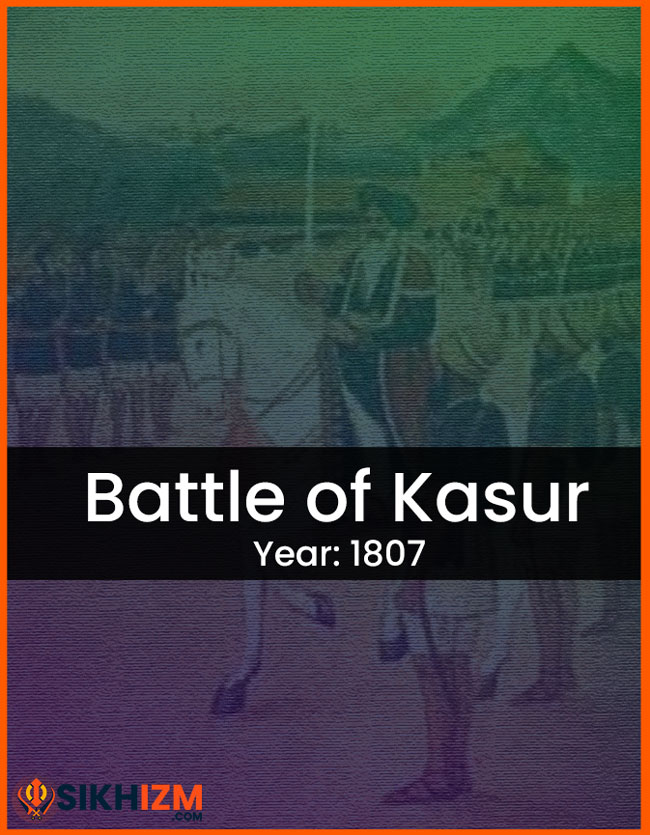 Battle of Kasur was fought between Sikhs and Pathans during the reign of Sher-e-Punjab Maharaja Ranjit Singh in 1807. It is said that the cities Lahore and Kasur were named after Lord Rama’s son Luv and Kush, but the relation between them were never brotherly during the period.

Kasur, lying between Lahore and Ferpzepore, was one of the famous cities of Punjab during the 18th Century. This ancient rival of Lahore, a stronghold of the Pathans, was then ruled by Nizam-ud-din. The Nawab of Kasur, Nizam-ud- din Khan was a rival of Ran jit Singh in his struggle for supremacy in Punjab. Ranjit Singh, having established supremacy over all the struggling allied forces, invaded Kasur and exacted tribute from the Nawab.

Nizam-ud-din Khan belonged to the Khweshgi section of the Mahammadzais, commonly known – as “Kasuria Pathans.” They had marched with the Babar’s armies from Peshawar and, later, settled south of Lahore astride the Satluj, where they were granted lands in jagir by Babar for their services rendered to him.

In 1797 and 1798, when Shan Zaman invaded Punjab, he wanted to use the Nawab as an intermediary between himself and the Sikh Chiefs of the time. Nizam-ud-din himself was keen to establish Afghan rule in Punjab. He offered assistance to Shah Zaman if the latter could let him hold Punjab in his name, for which he would pay a yearly tribute of five lakhs of rupees. The Shah rejected this offer. Shah Zaman returned to Kabul disappointed through lack of co-operation by the Nawab.

Quarrels of Sikhs and Treaty with Nawab

Nizam-ud-din wished to take advantage of the mutual quarrels of the Bhangi rulers of Lahore and occupy the city himself. But the scheme leaked out prematurely, and the Nawab could not fulfill his desire.

In 1801, the Nawab of Kasur and Sahib Singh Bhangi, Chief of Gujrat, revolted. To deal with the rebels, Ranjit Singh himself proceeded against the Bhangi Chief and despatched Sardar Fateh Singh Kalianwala to deal with the Nawab of Kasur. On hearing the march of the Lahore forces, The Nawab made preparations to defend himself. The two forces met outside the city of Kasur, and a severe battle took place.

The Afghan stand did not last even a full day, and it soon crumbled. They retreated inside the fort, where, also, they were mauled. When the fort was about to fall, the Nawab sued for peace. He surrendered himself and accepted the following terms offered to him.

(a) The Nawab was to pay tribute and acknowledge himself as a feudatory of the Maharaja,
(b) The Nawab sent his brother, Kutab-ud-din, to Lahore to pay his respects to the Maharaja.
(c) The Nawab was to furnish a certain number of troops to the Lahore ruler.
(d) Two Pathan chiefs were to be sent to Lahore as hostages. (They were, however, later presented with khillats and allowed to return to Kasur).

In 1802, Nizam-ud-din disregarded the treaty; and, having collected a sufficiently large force, pillaged two villages which fell in the Lahore jurisdiction; he was planning for further infiltration, when it came to the knowledge of Ranjit Singh, who, now determined to deal with the Nawab severely, himself marched towards Kasur. He also sent for Fateh Singh Ahluwalia, who joined the Maharaja in this venture with his force. The two contestants met on the open ground, and a fierce battle took place. Both Ranjit Singh and Fateh Singh distinguished themselves by acts of great personal bravery.

The Pathans, being no match for the Lahore troops, retired into the fort. The violent battle, accompanied by great slaughter on both sides, once again took place. However, the fort surrendered to the young Maharaja. The buildings in the Kasur city were formed in blocks, each forming a separate population; when fighting in the built-up areas took place, these Abadis were reduced one by one without much difficulty.

The Nawab seeing his hopeless position presented himself before the victor “with every sign of humility.” He promised submission and paid a large sum as Nazrana plus the expenses of the war to the Maharaja, who reinstated the Nawab.

In the same year (1802), Nizam-ud-din was assassinated by his brother-in-law. The jagir of the latter had earlier been confiscated by the former, Qutab-ud-din, alleged to have had a hand in this murder, succeeded his deceased brother.

Ranjit Singh, taking advantage of the situation, invaded Kasur for the fourth time. In this expedition also, the Maharaja was accompanied by his friend Fateh Singh Ahluwalia. Qutab-ud-din, on bis side, bad strengthened his defenses and had also laid ambushes throughout the country to hinder the invader’s advance, which he was able to delay. For about seven months, the expedition carried on. Seeing no other way out, the Maharaja cut off the supplies for the besieged and compelled the Nswab to surrender. The Maharaja accepted a huge sum as a penalty for the rebellion and withdrew from the Kasur territory.

The incorrigible Nawab had again started creating trouble. Qutab-Ud-Din persecuted Sikhs and Hindus in his area and collected a force of ghazis to create trouble for the Maharaja. He started preparing for war in which Muzaffar Khan of Multan secretly helped him; he had all the small forts in his territory stocked with ammunition and provisions, Faqir Aziz-ud-din, the foreign minister of Maharaja Ranjit Singh who had been sent to the Nawab to ascertain the facts, was insulted by the latter for being in the service of the Sikh ruler. The Maharaja was infuriated on this treatment meted out to bis ambassador and disregarded the recently concluded treaty.

In 1807, therefore, after the capture of Pasrur, the Maharaja, who was anxious to remove this thorn (of Kasur) from his side and strengthen his position, decided to invade Kasur. It was too near his capital to be left in the hands of the people hostile to him, “nor was he, perhaps, without a feeling that the reduction of the large colony of Pathans, and the annexation of the mythological rival of Lahore, would add to bis own merit and importance. So, once again, the Maharaja diverted his attention towards Kasur, and, no sooner the preparations were ready than be, accompanied by Sardar Fateh Singh Kalianwala, invaded Kasur on 10th February 1807. The Nawab also came out with his force.

They fought two fierce battles, and in both, defeated the Pathan colonists. Sardar General Gurmukh Singh Lamba was tasked to capture fort of Morada from Afghans chief Qutab-ud-Din. Afghans were very strong on the ground there were twelve small forts which were occupied and defended by the Afghans to deny expansion of Khalsa Sarkar after the capture of Lahore in 1779.

The opening bout in Battle of Kasur had taken place between the fanatics on either side, the Nihangs and the Ghazis when the former pushed back the latter. The Nawab, with his force, retired to the fort, which had already been stored with provisions of arms and ammunition. The invaders besieged the fort of Morada and cut off all communications with the outside world. The siege lasted for about a month, during which the guns pounded the fort walls. The whole surrounding area was laid waste. When the besieged had consumed, their provisions started living on the flesh of horses and cattle.

Fall of the Fort of Morada

One night, the western wall’ of the fort was mined by the Sikh miners, and by the time it was dawn, the wall collapsed. Through this, a breach rushed in the Sikh force, and hand-to-hand fighting took place. But the victory was for the Sikhs, who then occupied the fort. General Sardar Gurmukh Singh Lamba led the charge and succeeded in capturing the fort of Morada. He was seriously wounded by the thrust of spear. He was rewarded by the Maharaja Ranjit Singh with the annual Jagir of Rupees eighty thousand from ilaqa Kasur for his valour in Battle of Kasur.

Qutab-ud-din was arrested while escaping and was brought before the Maharaja who, on the Nawab’s begging, pardoned the latter and granted him a jagir at Mamdot and the surrounding area, east of the Satluj; here he built the new town of Jalalabad. In return, the Nawab promised to provide the Maharaja with 100 equestrians whenever required by the latter. They annexed the territory of Kasur to the Lahore Darbar. The acquisition of Kasur, the mythological equestrians of Lahore, removed the Pathan colony and increased the popularity of the Maharaja among the people of Punjab. The fall of Kasur brought the Maharaja a huge property consisting of jewels, rich stuff and fabrics, shawls, ‘ horses, and camels. The Maharaja, then, returned to Lahore and celebrated the victory in his usual way on a grand scale. Some of the rich stuff was sent as an offering to the Golden Temple at Amritsar.

Well researched, perfect in timeline article. We have always praised Sikhs for their bravery but Pathans were never behind sikhs in exhibiting valour in battles, such was the one - Battle of Kasur.