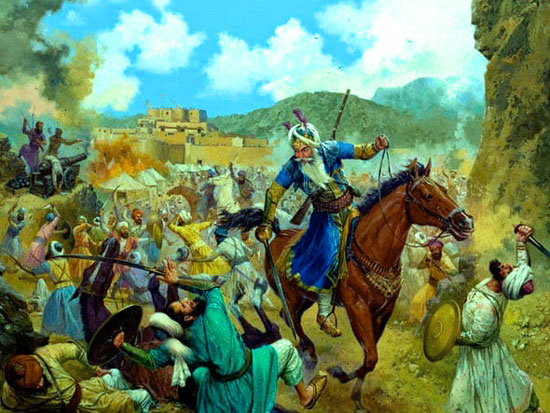 The battle of Balakot was fought between Sikhs under the leadership of Sher-e-Punjab Maharaja Ranjit Singh and Mujahedeen under the supervision of the Barelvi and Dehlavi families. Barelvis under Syed Ahmad Barelvi along with his associate Dehlvis under Shah Ismail Dehlvi clashed with Khalsa Army on 6th May 1831.

Syed Ahmad Barelvi of Rai Bareilly was influenced by the teachings of (Abdul Wahab of Saudi Arabia) and (Shag Waliullah of Delhi). They condemned the western influence on Islam and advocated a return to Pure Islam. The important teaching center was at Patna. They started Wahabi Movement and came to Kashmir to instigate people to fight against Sikhs (because at that time, Kashmir was under the rule of Maharaja Ranjit Singh and was a province of Khalsa Raj aka Sikh Empire). Barelvi and Dehlvi wanted to re-establish Muslim rule in Kashmir.

Barelvi and his Mujahedeen army fought small skirmishes with the Sikhs but lost again and again. In 1831, Maharaja Ranjit Singh came to know that both (Barelvi And Dehlvi) were hiding at Balakot and had started terror camps in Balakot giving training to Mujahidin to fight against Sikh Empire. This time he sent General Hari Singh Nalwa (nicknamed the Tiger-Killer) to Balakot to completely uproot and kill the Mujahedeen army.

On 6th May 1831 the battle was fought at Balakot in which thousands of Mujahedeen army men were killed and their leaders Dehlvi And Barelvi were also beheaded. Sikh army completely destroyed their terror training camps. 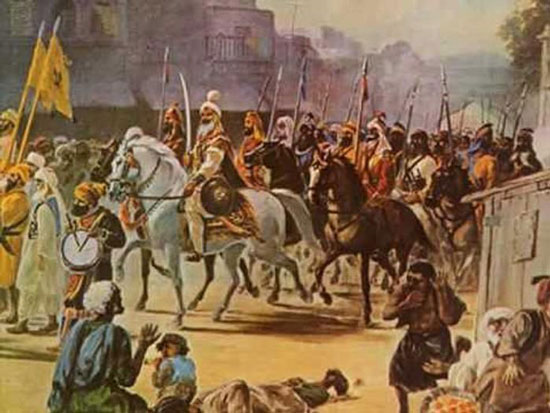 Battle of Balakot is associated with which movement?

The Battle of Balakot marks an exceedingly essential revolution in the late 17th century Sikh affairs. The battle of Balakot marks the first-ever Jihad founded by Wahabi ideology. Wahabis found themselves in a state of depression when they found out the rule of the infidel in Jammu and Kashmir.

They wanted to re-establish Islamic policies of Islam or shariah and Mughal kingdom which was nearly extinct at that time. Lead with a fanatical person it aimed to eliminate the Sikh empire, expand the new state’s boundary to attach with British India, and finally birth a broadly strong Muslim country.

Who was Syed Ahmed Barelvi?

The Battle of Balakot was the brainchild of Syed Ahmed, a profoundly spiritual Islamic individual that has been granted the honor of being the earliest native Jihadi of their Indian sub-continent. He was born in Rai Breli in 1786 A.D. during the Mughal Empire was counting its last breath.

It was a high time of unrest in the entire sub-continent, Marathas had succeeded in establishing their independent domain despite being mauled horribly by Abdali. The Sikhs had succeeded in major parts of Punjab and planting the seeds of a strong and Alexandrian empire, although a significant part of the sub-continent was split among different warlords, generals, and princes.

Assuming the rivalry of Afghanis and Sikhs, Syed assumed unwittingly that Afghanis would help him in establishing the reign of the caliphate by crushing Sikh infidels.

With these possible factors as his foundation, Ahmed abandoned his loved ones and with absolute faith in Allah traversed towards Peshawar. His travel was tough and bone-breaking. He took a path through Sindh, Quetta, Kandahar, and Kabul, and came heavily drained in Peshawar where he outlined his own strategy to the many regional warlords and warrior people.

A broad number of those individuals had already witnessed the beauty of Khalsa forces and were profoundly disillusioned by Syed’s own ineptness and heavy dependence on destiny combined with fortune.

He still managed to raise an army of Mujahedeen warriors and succeeded in assaulting a couple of Sikh lands but were largely smashed back. Ahmed on viewing this and following rooting together with his accomplices, such as Shah Ismail that the grandson of Shah Waliulah of Delhi, decided on a fresh plan of action.

Finally settling foot in Balakot in 1831 A.D., Ahmed’s strategy was to engage the Sikh from the hills of Balakot, annihilate them, and defeat neighboring Kashmir; yet another elongated realm of Ranjit Singh’s regional fiefdom.

A letter of Syed to an accomplice explains his experience of Balakot:

I’m in the hills of Pakhli (title of this area). The folks that have welcomed us with hospitality and warmth and also have provided us a place to stay. They also have promised to encourage us at the jihad. For now, I’m camped at the town of Balakot, which can be situated in the (river) Kunhar pass. Obviously, we might opt to progress and input into a struggle at our own initiative. And this we mean to do in another a few days. With the support of God, we’ll be victorious. When we win this conflict, and, God willing, we shall, then we’ll occupy all of the land together with the Jehlum River such as the Kingdom of Kashmir. Please apologize, night and day, for our success.

Hari Singh Nalwa, the lion-shredder, has been the viceroy and commander-in-chief of those territories. He commanded captain Sher Singh to encircle Balakot and proceed a battalion of the Khalsa Armies to Muzaffarabad.

A couple of companies also surrounded Mitti Kot, the coastal terrain surrounding Ahmed’s Mujahiddins. Ahmed had a plan to trap the Khalsa forces, but soon it was exposed to the Akali Nihangs of the Sikh Army.

But he ordered a headlong charge into the Khalsa forces. Discarding all caution the mujahideen vainly charged the joyous Khalsa who readily clashed with it. Amongst the cries of Allah, and Waheguru a bloody slaughter commenced.

It is believed that 1300 mujahideen blindly lost their lives that fateful day, with the Khalsa receiving only a few casualties. The first indigenous sub-continental jihad met its demise in a bloody fashion.

Alexander Gardner produced this eyewitness account as he was present in the battle of Balakot. He was a Scottish or Irish or American who knows? but at the time of the battle was serving as Commandant of Artillery in the Khalsa army.