Guru Teg Bahadur Gurgaddi Gurpurab: Guru Tegh Bahadur was the ninth Guru of the Sikhs, appointed to the Gurgaddi on 20 March 1664. He was also an outstanding warrior, thinker, and poet known for writing touching poems on the importance of human life and the perishable world.

Guru Tegh Bahadur Singh Ji remained on Gurgaddi till 24 November 1675 until he Sacrificed himself for the sake of Religion and passed his spiritual throne to Guru Gobind Singh. He is also fondly honored by the name of ‘Hind ki Chadar’. His writings have been presented in the form of 116 poetic hymns in Guru Granth Sahib.

How Guru Tegh Bahadur was appointed on Gurgaddi?

When Guru Harkrishan Ji at the time of his departure to the heavenly abode could not name his successor to Gurgaddi and uttered only two words ‘Baba Bakale’ then interested parties interpreted it according to their own perceptions. ‘Baba Bakala’ meant that Guru was at Bakala. So about 22 pretenders posed themselves as the true Gurus and established their Manjis there.

Though in Punjabi the word Baba is used for grandfather. But there is also a tradition to call pious persons Baba. But when Guru Harkrishan spoke these words at that time there was no other house of Guru at Bakala.

Guru Tegh Bahadur was staying there for more than twenty years. He was the son of Guru Hargobind and was leading a very pious life. So he was known all over Punjab. He had even traveled to India and had many followers.

Among the twenty-two aspirants who styled themselves as true Guru, Baba Dhir Mal a nephew of Guru Tegh Bahadur was the most formidable. As he had the copy of Granth Sahib compiled by Guru Arjan Dev with him so he had fairly a good following. But he was not the grandfather of Guru Harkrishan. He was not also the son of any Guru. Though he was the brother of Guru Har Rai Sahib. Guru Tegh Bahadur was the son of a Guru and grandfather of Guru Harkrishan. Dhir Mal was not a resident of Baba Bakala and neither he was living there. But he tried his best to prove to himself that he was the true Guru.

Guru Tegh Bahadur did not care about this drama. Mata Nanaki asked him again and again to challenge the claims of false pretenders, but he did not agree. The devotees coming to Bakala to pay homage to Guru were feeling bewildered. Masands of all pretenders were assuring them that their Guru was true.

Mata Nanaki could not tolerate such a fake show to let loose for more days. She wrote a letter to Bhai Garia and Bai Dwarka Dass to come to Bakala in order to coronate Tegh Bahadur as the true Guru. These Sikhs reached Bakala and summoned a meeting of pious Sikhs to solve the problem. Bhai Dargah Mal and Baba Gurditta also reached there. They were present in Delhi at the time of Guru Harkrishan’s departure for the Divine journey.

After attaining Guruship, the Guru advised them that they should not announce that he was the true Guru. The Guru did not want to adopt those methods which the pretenders were doing. He did not consider Gurudom as a business. It was a Divine throne that was above worldly transactions. The Guru was confident that those false pretenders would not last long. These false faces would be uncovered one day.

One day a rich trader named Bhai Makhan Shah came to Bakala. He was a great devotee of Guru Nanak. Once his ship was being wrecked in the sea when he requested the Guru for help. Gradually the storm subsided and he reached his destination safe and sound. While praying to the Guru, Bhai Makhan Shah had sworn to offer five hundred gold Mohars (coins) to the Guru.

When he inquired about the residence of the Guru, he was told that the Guru had gone to Delhi. But when he reached Delhi he was told that the Guru Harkrishan had passed away and his successor was living at Bakala in Amritsar district. So Makhan Shah reached Bakala to give his offering to the Guru. But he was confused to find so many Gurus. So Makhan Shah decided to offer two or five gold mohurs to each self-styled Guru. Makhan Shah tested all the pretenders where to his surprise no one asked him about the five hundred mohurs.

Bhai Makhan Shah knew that Sri Guru Tegh Bahadur, the younger son of Guru Hargobind was staying permanently at Bakala. All other pretenders had come from other places. So he concluded that the real Guru must be Guru Tegh Bahadur. Along with his wife, Makhan Shah visited the house of Guru Tegh Bahadur. First of all Makhan Shah met Mata Nanaki. He expressed his desire to meet the Guru. Mata Nanaki guided him to the ‘underground apartment where Guru Ji used to sit for meditating on the Name of God.

It was his daily routine whenever he was free from the household duties he sat there to concentrate on the Name of God. Makhan Shah was amazed that there prevailed a celestial bliss on the face of the Guru and the atmosphere was calm and peaceful. The personality of Guru Tegh Bahadur attracted him in such a way that he at once concluded that he had founded the real Guru.

Guru Tegh Bahadur was the ninth Guru of the Sikhs, appointed to the Gurgaddi on 20 March 1664. He was also an outstanding warrior, thinker, and poet known for writing touching poems on the importance of human life and the perishable world. 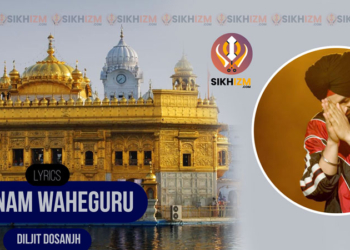