The True Guru (briefly written as 'Guru') has been defined as the one, who comprehends the True Purusha oe. Lord-God. 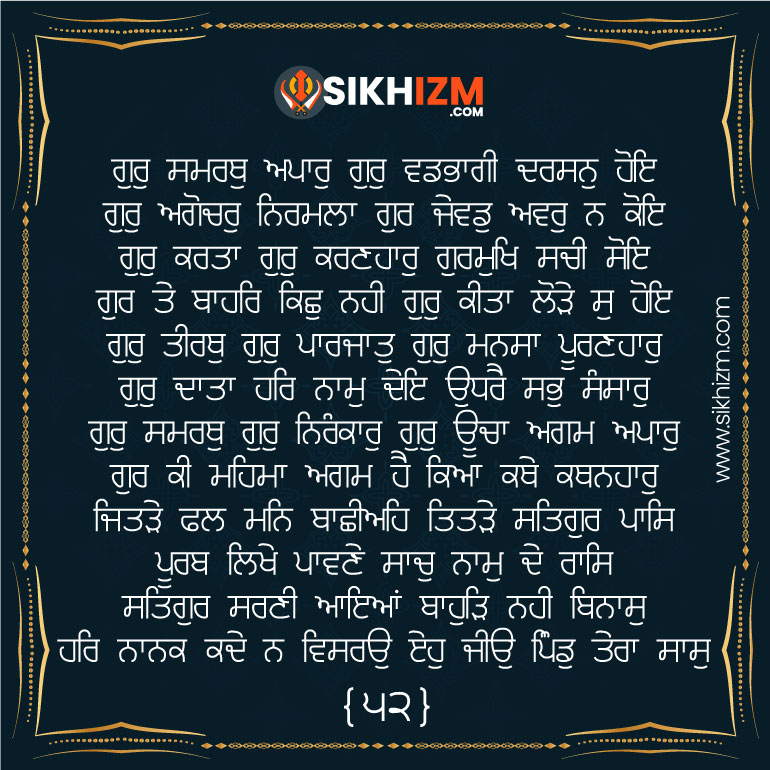 The True Guru (briefly written as ‘Guru’) has been defined as the one, who comprehends the True Purusha Le. Lord-God. It is only in his company, the Sikh attains final beatitude by singing the Praises of Lord. (Gauri Sukhmani M. S, p. 286). The Sikh religion is based on the Guru-Sikh relations. Guru Nanak Dev has said:

I am a sacrifice to the True Guru, on meeting whom, I have remembered the Lord,
Who instructed me and gave me the antimony of knowledge and with these knowledgable eyes, I have scanned the whole world,
Those, who haveforsaken the Lord and have attached themselves with some other, such traders have been drowned,
The True Guru is a ship, only a rare one has thought about it,
The True Guru through his Grace has enabled me to cross the world-ocean.
(Var Asa M. 1, p. 470)

The fourth and fifth Gurus have described at length the position of the True Guru in their hymns. According to the fourth Guru, Guru Ramdas ‘the True Guru is the Gracious Donor, who is ever Merciful, he is uninimical from within, who sees the Lord everywhere.

Those, who become inimical towards him, none of them can stand against him for long. The True Guru has the welfare of everyone in his heart, who can then be harmful towards him? Whatever one desires to receive from him, he obtains the same. The Lord knows everything, from whom nothing remains hidden.

The True Guru is the field of Piety and whatever one sows in it, he is rewarded likewise. The Sikhs of the Guru sow ambrosia in it, they obtain the Lord as ambrosia, their faces are bright in both the worlds and are honored with robes in the Lord’s Court. (Var Gauri M. 4, p. 302). The True Guru is the Unapproachable Purusha, who keeps the Lord in his heart.

If any slanderer of the True Guru comes under his refuge, the True Guru forgives his sins and allow him to join the holy congregation. Just as when it rains, the water of streets, brooks, and ponds flows down to the river Ganges, where it becomes pure and holy, this is the compliment of the True Guru, who is without enmity and on meeting whom aII the thirst and hunger is removed and the peace prevails very quickly. Look at this wonder of the True Sovereign Lord, that whosoever has faith in the True Guru, is loved by all, (Var Bilawal M. 4, pp. 854-55),

Some quotations from the hymns of Guru Arjan Dev, expressing his extreme love and respect for the True Guru are produced below:

1. Guru is Powerful and Boundless, He comes into our sight by great fortune. The Guru is unknowable and Pure, none equals the Guru. The Guru is the doer and maker and through him, one attains the true glory. There is nothing outside the Guru, whatever the Guru wants, happens. The Guru is the holy shrine, he is the Elysian tree, he is the fulfiller of desires. Guru is the donor, he gives the Name of the Lord and the whole world is redeemed. The Guru is Mighty and the Lord Himself. He is the High one, Unapproachable and Limitless. The Praise of the Guru is Inaccessible, what should the narrator narrate? (Sri Raga M. 5, p. 52)

2. Whatever I had heard about the Grace of True Guru, I have found him the same. He unites with the Lord the separated ones. He is the Mediator of Lord’s Court. He fixes firmly in the heart, the mantra of the Name of the Lord, and removes the ailment of ego. The True Guru has been caused to meet those, saith Nanak, who had been destined from the very beginning. (Var Ramkali M. 5, p. 957)

3. My True Guru is ever Gracious, who has protected lowly one like me. He has dispelled the malady giving me the Supreme Bliss and put in my mouth the ambrosial Name of the Lord. He has repelled many sins of mine and cutting my bondage freed me. Catching me by the arm, he has taken me out of the most terrible blind well. (Asa M. 5, p. 383)

5. Concentrate on the Guru’s image in your mind and have full faith on the Word of the Guru as the mantra, adopt the Guru’s feet in your heart·, and make your obeisance always to the Guru as the Transcendent Lord. None should fall in illusions in the world. Undoubtedly, no one will be able to cross the world-ocean without the Guru.

He who has strayed, the Guru has shown him the Path. Forsaking all others, he has to absorb himself in the devotion of the Lord. The Guru wiped out his fear of birth and death. This is the Limitless greatness of the Perfect Guru. By the Guru’s grace, the inverted lotus of the heart has blossomed and there has dawned light in the darkness. I have known through the Guru the Lord, who has created me and by the Grace of the Guru, my foolish mind has propitiated. The Guru is the doer and worthy of doing and the Guru like God is ever there and ever shall be. The Lord has made me comprehend this, saith. Nanak, O brother! No one can attain salvation without the Guru. (Gaund M. 5, p. 864)