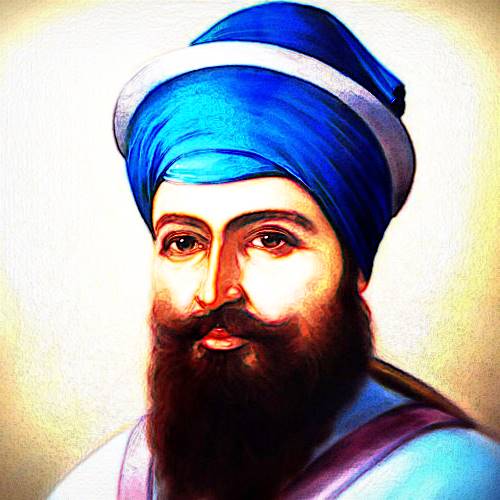 The life of Piare Bhai Daya Singh Ji, the founder of the Spiritual Lineage, is a wonderful example of faith, devotion, worship, and piety.

The royal splendor of Anandpur, the beauty of Paonta Sahib, the formation of the Khalsa, the battles of Anandpur, separation of the family on the banks of Sirsa river, the battle of Chamkaur Sahib, forests of Machhiwara, departure to the Malwa as the Ucch da Pir, sending of Zafarnama (Letter of victory) to Aurangzeb, meeting with Emperor Bahadur Shah, etc. were such stages of the wonderful life of Guru Gobind Singh Ji which Bhai Sahib Ji witnessed closely and also registered his involvement at every stage of life of Guruji who had come to see the drama of the world.

At the age of 16, he came to Sri Anandpur Sahib under the patronage of Guru Teg Bahadur ji and started doing his service earnestly.

On Baisakhi of 1699 A.D. at the time Khalsa Panth was formed by Sri Guru Gobind Singh Ji the benefactor of Amrit, Bhai Sahib Ji offered his head first of all, and became Daya Singh from Daya Ram. Guruji gave him the honor of being his LOVED ONE.

He, as head of the Five Beloved ones, did service of providing Khande da Amrit (Amrit Sanchar, initiating rite of Khalsa), till he breathed his last. Later, a system, in which his descendants, many Great Gursikh saints were entrusted with the task of performing Amrit Sanchar came into vogue which will be briefly mentioned subsequently.

Under the Guru’s command, he along with the service of doing Amrit Sanchar implanted Gurmat Updesh in Sangat which reveals the deep secrets of spirituality. The concept of Gurmat Karma philosophy, Vedanta, and other lessons of spiritual knowledge are sermons of Bhai Daya Singh Ji as mentioned in Sri Gurpartap Suraj Granth, Rut 5 by the famous Sikh poet Bhai Santokh Singh Ji Chudamani.

In the Garhi (small mud fort) of Chamkaur, the five Sikhs, acknowledged by Guruji as the representatives of the Panth, were honored with ‘Khalsa is my Absolute Satguru’. Bhai Daya Singh Ji was one of them. Abiding by the instruction of those five, Guru ji agreed to leave the Garhi of Chamkaur.

At the time of Guru Ji’s departure from Machiwara to Malwa as ‘Uchch da pir’. Bhai Daya Singh Ji served as Guru Ji’s CHAURBARDAR (one who fans flywhisk out of respect and dedication).

From Dina Kangar, Guru Ji handed over Zafarnama (The Letter of Victory) to Bhai Daya Singh ji for Emperor Aurangzeb who had lost gamble of his life. After Aurangzeb’s death, when Guruji met his heir to the throne, Bahadur Shah, at Red Fort in Agra, at that time also Bhai Sahib Ji was present there.