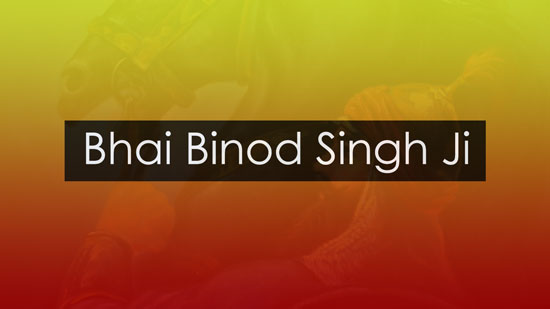 Baba Binod Singh was a Trehan Khatri in direct descent from Guru Angad Dev Ji, was a devoted disciple of Guru Gobind Singh, and was among the few Sikhs who accompanied him to the South in 1708. He was chosen to be one of the five companions of Banda Singh Bahadur (1670-1716) sent by the Guru in 1708 from Nanded to Punjab to chastise the persecutors of the Sikhs. Binod Singh was Banda Singh’s ally in the campaign he launched upon arrival in Punjab. In the battle of Sirhind fought in May 1710, Binod Singh commanded the left wing of Banda Singh’s army. He was pitched against Sher Muhammad Khan of Malerkotla who was commander of Subahdar Wazir Khan’s right-wing (this Sher Mohammad Khan is the same raja of Malerkotla who when seeing that Chhote Sahibzade were being martyred asked whether “it was right”).

In October 1714, Binod Singh with his followers parted company with Banda Singh when they declared themselves as Tatt Khalsa (True Khalsa) as oppose to the Bandai Khalsa (of Banda Bahadur). He was, however, in two minds: he wanted to obey Mata Sundari’s command, and at the same time was unwilling to fight alongside Banda Singh. There were several reasons for this problem, the major one being that Banda Bahadur had started to behave like as he was Guru. No sooner had Bhai Binod Singh started moving away at the head of his men than he was attacked by the imperial forces on all sides. According to Khafi Khan, three to four thousand of his men were killed. Binod Singh is believed to have lost his life in this massacre, too. That was in 1716.

The feud between Tatt Khals and Banda Bahadur was solved by Bhai Mani Singh Jathedar of Akal Takht. There were several small feuds, for example, which war cry “Sat Sri Akal” or “Fateh Darshan”. He asked Sadh Sangat and a resolution was reached that on two pieces of paper the war cries of Tatt Khalsa “Sat Sri Akal” and Bandai Khalsa “Fateh Darshan” will be written and then to be simultaneously dropped in the Sarovar at Darbar Sahib, Amritsar., the one which came up first was adopted and that was Sat Sri Akal. There were bouts of physical feats between Bandai and Tatt Khalsa, with Tatt Khalsa emerging victorious in competitions of Kabaddi, wrestling, etc. After this, the whole of Bandai Khalsa became a Tatt Khalsa. This minor issue was resolved in such a peaceful and simple manner by Bhai Mani Singh Ji.