Why Maharaja Ranjit Singh so popular among the people of Punjab? While analyzing the popularity of Maharaja Ranjit Singh with his subjects, one finds that Sher-e-Punjab had adopted a secular approach towards them. But that was not the only reason. We’ll give you 13 reasons why he was so popular in Punjab and still lives in the heart of every Punjabi even after 180+ years of his death.

Maharaja Ranjit Singh has been described as Sher-e-Punjab, the Lion of Punjab. During his adolescence, he killed barehanded a lion at Gujranwala, and the place to date is known as the Sheranwala Bagh or the garden of lions. The reason for this. a popular synonym is that he was a lion-hearted person, a heroic warrior, and the legendary ruler of Punjab. It would not be correct to call him the Maharaja of Punjab, as his empire extended not over the villages and towns of the state but his domain, in reality, was the hearts of the people, whom he ruled and loved. It would be more appropriate to call him the Maharaja of the Punjabis. He was in reality a symbol of the Punjabi culture and a typical representative of the Punjabi folk.

According to Hugel Ranjit Singh’s influence over the people amounted to enchantment. Nobody in Panjab objected to his doings with dancing girls, because they were professional. Further, they believed that the king had a right to indulge in such frivolities. His generosity made. him most lovable and did not affect his dignity, honor, and prestige. The Sikh State was popular in Panjab. It was a symbol of a national institution that allowed people of all castes and creeds to live in peace and prosperity from foreign hordes and lawless inhabitants of the land. Hindus and Musalmans were in no humor to quarrel with it because it was a Sikh State. They did not want any revolution. The government also did not want to provoke them beyond a certain limit in the realization of taxes and duties. Thus the rulers and the ruled both remained within bounds.

He was democratic in his administration and as an individual, he was considered liberal and a generous monarch, who had the knack of owning and endearing people. A historian from Pakistan Wahid-ud-din has paid touching tributes to him. He says:

“His name is still a household word in the province. His portrait is still preserved in the castle and in the cottage. It is a favorite subject with the ivory painters of Amritsar and Delhi. Ranjit Singh still lives, large as life, in the imagination of the people. He does so, not only where the Sikhs now live, but also where they lived before; for, the Muslim village folks shared him as a legendary figure with the Sikhs and they have not let him depart with the latter, Ranjit Singh’s popular image is that of a kindly patriarch rather than that of a conquering hero or a mighty monarch. He was all there, but his humanity has outlived his splendor and power.”

The secrets of Popularity of Maharaja Ranjit Singh

1. Ranjit Singh did not interfere with the well-established customs and practices of the people. On the contrary, he respected and protected them.
2. Panchayats in villages were allowed to function unhampered.
3. He patronized all religions alike.
4. He applied no force to convert people to Sikhism.
5. He offered posts on the criterion of merit, talent, and character with strict impartiality.
6. Religious shrines of all were given equal consideration.
7. Justice was administered equally between man and man.
8. He participated in all fairs and festivals of all.
9. He gave full support to develop agriculture, trade, commerce, and industry.
10. In times of emergency such as floods, and epidemics, he gave to people every possible help.
11. Extortion by his officers and troops was not permitted.
12. All disputes were settled according to Shastras, the Sharia, and the old customs, usages, and practices of the parties.
13. There was perfect security of person and property. 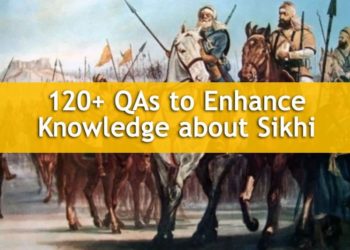