Concept of Body, Mind and Soul in Sikhism 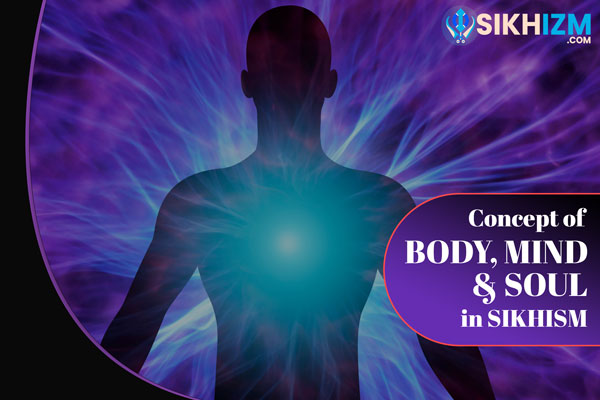 Concepts of body, mind, and soul in Gurbani

The existence and existence of human life are due to the mind. Gurbani states:

The mind has been described as the light of God as well:

These three qualities of the mind are also described in Gurbani as follows:

The mind is Shakti, Shiva is the Anand Saroop Prabhu and the is body made up of five elements.”

The mind is the working force and the righteous being who walks on the path of Dharam. It is born in a body made up of a combination of five elements.

The mind is in the body and the True Lord abides in the mind. The mind unites with the Creator Lord. The ability to unite with the Lord is only in the mind because that is the part of the Lord.

Are Mind and Soul Same?

Due to the existence of matter, the body keeps changing every moment and at death, it becomes dust and merges in it but the mind does not die. Gurbani states:

means Hey brother! Somebody search for this soul, only after separating from the body, where does this soul go? The person whose illusion is erased, and he recognizes the truth, his soul does not fall in the cycle of birth and death. Here “Man” is treated as soul clearly. But as this is just a Drishtant, a Viveksheel Sikh can clearly differentiate the existence of Body, Mind, and Soul.

This means This soul kept wandering in many births, but after coming under the shelter of Satguru, Satguru told him the secret of the word.

This means This ego is the cause of the bondage of the soul, so the soul repeatedly falls into the lifecycle again and again.

Materialists and scientists do not have a sufficient amount of knowledge to comment on the ‘mind’ or ‘ਮਨ’ yet. They acknowledge the human intellect as the controller of matter and power and consider human existence to be the result of the sexual relations between man and woman. They do not believe in the unseen mind and the Lord nor give any clear opinion about them. They also offer no satisfactory idea of ​​the source of the power that keeps the human body alive.

The mind is not visible even though it is in the body but despite being invisible it is the driver and owner of the body and considers the body as its home and property. Only by abiding in the body does he become able to unite with the Lord by removing the filth of the mind through the Gur Shabad. That is why Gurbani attaches so much importance to the body.

Kabir Ji preaches that human birth is rare, it is not obtained again and again. As a fruit ripens in the forest and falls on the ground, it does not touch the branch again.

The human body provides the opportunity for the union to the Lord:

This human body is a shop and the mind is a merchant sitting in it. Nanak says that this mind easily keeps on doing business of truth.

There are three basic needs of the body in which the mind also participates. They are food, clothing, and shelter. Gurbani teaches self-restraint for the fulfillment of bodily needs as it is neither a supporter of various dishes, new fashions, and luxurious mansions nor fasting, nude hermits, and living in forests.

In addition to the basic needs of the body, other needs of family and social life are also important. These include work, education, recreational activities, and disability in old age. The Lord has already made arrangements to meet the personal and social needs of human beings.

The bodies of the living beings are made of ignorant soil and the conscious nature is contained in these bodies. Oh, God! You give everything to living beings. you give living beings a good place to live. And these creatures get various kinds of luxury, humor, amazing prodigy, and entertainment. whatever pleases you, that’s what happens. (Remember that God) from whom we are taking everything.

And eating thirty-six kinds of food. We are getting a soothing bed to sleep in, we enjoy the cool breeze and indulge in luxurious sports. O, dear Lord! Give me the wisdom that will not forget you. Grant me such a mind so that I can keep meditating on you only.

The Creator who created the body has put pride in it. Due to ego, a human being is not satisfied with a contented life and the belief in a separate independent existence drives him away from the Lord. The mind, instead of uniting with the Lord dwelling within it, makes the main aim of its life to participate in the race for fame and glory in the world under the influence of fear and desire.

Humans as One Race in Sikhism

According to Gurbani, the Lord’s will is used in the world and every human being has a share of the Lord. Gurbani states:

There is no fool in this world and no one is intelligent. Your will is working everywhere.

All beings are called your partners and no creature feels that you reside in any other place outside it.

This view of Gurbani is considered unique by the present age of consumerism because the structure and existence of society are based on the division in humanity and in today’s life competition, controversy and wars have become predominant. But Gurbani exhorts the human being to establish and maintain peace, unity, equality, and personal freedom in this conflicting and unjust society.

Gurbani does not accept the existence of anyone other than the Lord. The man also has no independent existence but due to the presence of mind in his body, which is a part of the Lord, he has existence. The Lord is present in all of humanity and His visions in the human race are made possible by inculcating the virtue of Nirvairta, because Nirvairta provides the vision that Gurbani describes as

means O Nanak! Those eyes are different through which the beloved Lord is visible.

Manna is Shakti and due to living in the body and getting work done from it, he gets trapped in worldly Maya. Maya resists him from looking inside himself and keeps busy with family and social activities outside. The five peccant themes of Maya – Kama, Krodha, Lobha, Moha, and Ahankara – control the human mind. Due to the powerful effect of this evil nature of Maya, the mind does not have the capacity to escape from them. A person who claims to have mastered Maya is making such a claim under the influence of Maya. Salvation from the influence of Maya is possible only by taking refuge in the Lord’s grace and his word.

It is important for a human being to fulfill family and social responsibilities but it is useless to worry about them by setting a goal in life. By walking in the Lord’s will and obeying His will the extra worries are removed. If he has protected life in his mother’s womb, he wouldn’t let you go unprotected outside the world either.

Describing the way to be the true form, Shri Guru Nanak Dev Ji says – It has been written since the beginning of the creation that only a worldly creature can do all this by following the orders of God.

Nanak says that O soul! Do not worry, because the concern of all is with God Himself.

But it is very difficult for a human being to follow the Bhana or Hukam and control the mind. The uncontrollable mind often takes the wrong path under the influence of Haumai and Maya.

O, saints! This cannot be done under the control of the mind. Because this fickle mind resides with craving. so it doesn’t standstill.

Kabir ji says that O gentlemen! Listen to me, this mind is a bird flying in the forest (don’t know when, where it will fly).

How Mind(मन) can be killed?

Gurbani instructs us to take refuge in the Shabad in order to kill the mind:

Even if everyone wants it, it does not die even by killing the mind. O Nanak! The pure mind kills the impure mind if one is interviewed with the Satguru.

When the mind becomes pure by recognizing the word, it praises God. When a man recognizes his Self by the instruction of the Guru, then he becomes abode at the feet of the Lord.

In Sikhism, the method of taking Amrit, wearing Panj Kakar, performing daily rituals are prescribed for religious life. These are all physical activities. The body does not have the ability to control the mind because the body is subject to the mind. It is not possible to control the mind through physical discipline but Sikhism in modern times believes in cultivating the mind through a physical discipline which Gurbani does not favor. 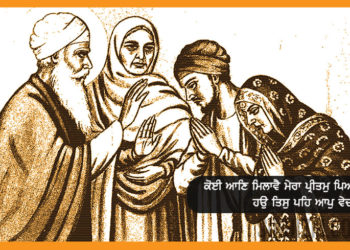