Sikhs around the globe will celebrate Guru Arjan Dev Ji Gurgaddi Diwas 2022 on August 29th, Monday. This Gurpurab marks the day when the 4th Guru Ramdas Ji passed the spiritual throne of Guru Nanak to his beloved son Arjan Guru, just a day before ascending to Sach-Khand.

Guru Arjan – The Poet, Builder, and the Organizer

Each of the ten Sikh Gurus or “the dispeller of darkness”, as the term Guru connotes, appeared in the land of five rivers, Punjab, during the span of 239 years (1469 to 1708 A.D., Guru Nanak to Guru Gobind Singh), had a very distinct and distinguished role to play, in their short sojourn on this planet, to alleviate the sufferings of mankind, spiritual, as well as, temporal.

Guru Arjan was born in Goindwal, district Amritsar, on April 15, 1563 A.D. to Mata Bhaniji, the holy consort of Guru Ramdas and daughter of Guru Amardas, the third Sikh Guru. He was the youngest of three brothers namely, Pirthi Chand, Mahadev, and Arjan.

He was married first during the lifetime of Guru Ramdas to Mata Ramkaur but this noble lady did not live long and passed away in the year 1589 A.D. leaving no issue. He was remarried in 1590 A.D. to Mata Ganga, daughter of Bhai Sangat Ram or Kishan Chand of village Lau near Pbillaur. Mata Ganga was a lady of deep faith and intelligence. One son was born to her in 1595 A.D. at village Vadali, near Amritsar when Guru Arjan was in transitory habitation there for the unfortunate reasons of undue hostility and harassment by Pirthia and his ill malevolently assisted by state officials. He claimed that the seat of Guruship was his right by birth as the eldest son totally oblivious of his unsuitability to be a leader of an immature spiritual institution.

Guru Arjan Dev is the central-most figure of Sikh history and is on all accounts a unique personality such as has no parallel. Coming as he did between Guru Nanak, the founder of Sikh Theocracy, and Guru Govind Singh, the creator of the Khalsa Brotherhood, Guru Arjan Dey combined the prophetic qualities of the one with the dynamic personality of the other. The more you read him the clearer becomes the conviction that Guru Arjan Dev was the very head and heart of Nanak. Were it not for him Sikhism would have run to seed, and it would not have been what it is today: a mighty pipal that has its roots deep in the bowels of Eternity. A worthy son of the worthy father, Guru Ram Das, it was Guru Arjan Dey who first proved in his person that the Guru’s son is really the fit person to step into the shoes of his father. Guru Nanak selected Angad in preference to his own sons, but evidently, the holy influence of Nanak was as much at work in the lineal line as in the outside world, so that a century of preparation had changed the very spiritual seed. The Guru held the gaddi for about 25 years, and these days were certainly the most successful in the expansion and consolidation of the Sikh religion. Read More… This Holy Gurpurab marks the Day when Sri Guru Ramdas Ji passed the spiritual throne of Sri Guru Nanak Dev Ji to his beloved Arjan Guru. May this Purab fill you with the joy of Gurbani, and help you to re-invent the lost purpose of your life. Waheguru Ji Ka Khalsa, Waheguru Ji Ki Fateh. 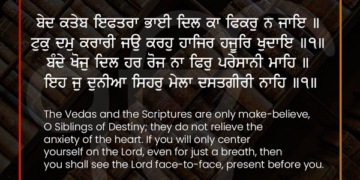