Sikh vs Hindu | Difference between Sikhism and Hinduism?

Sikh Vs Hindu article is specially for those people who say on every occasion that Sikhs are actually Hindus who were descended from Hindus.

by Sikhizm
in Article, Facts
0 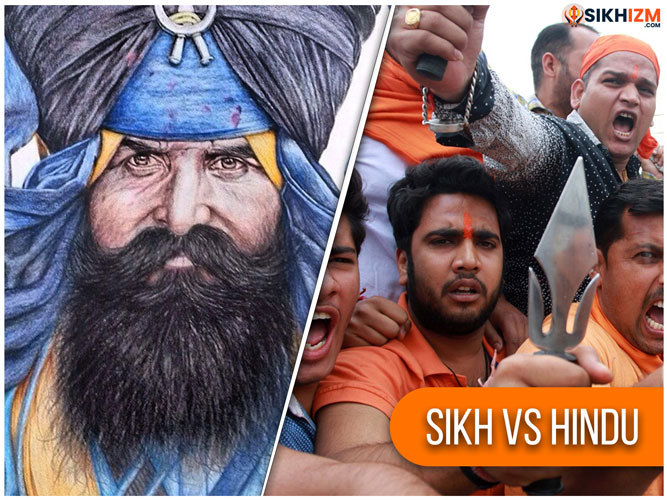 First, I would like to share the core idea behind the article “Hindu Vs Sikh.” Sikhism does not come from a narrow school of thought. Sikhism considers entire humanity as one, and whatever differences we have in our faith, color, ideologies, we have a firm belief in “ਘਟਿ ਘਟਿ ਮਹਿ ਹਰ ਜੂ ਬਸੈ.” But there is Maryada for the outer discipline of Every religion; there is a code of conduct and set of rules for all Organised religions, even not having a rule is also a rule in itself. Here are few points we would like to discuss:

Guru Nanak Was a Hindu?

Shri Guru Nanak Dev Ji founded Sikh Panth, and he belonged to a Hindu family, so most people say that Guru Sahib was a Hindu, which is wrong.

Guru Nanak Dev Ji’s father was indeed a Hindu. But Guru Sahib Ji did not become a Hindu because he refused to wear Janeu as a child. His hairs were not removed according to a necessary Hindu ritual, only after which any child could enter the Hindu religion at that time. And all Hindus and most Sikhs are aware of it, so it is completely useless to say that Guru Sahib Ji became a Hindu.

The most important thing that we want to tell you is that Judaism was the first Abrahamic religion in the West, and then Christianity came out of Judaism. Later Islam emerged out of this religion. Now people who believe in these three religions never expressed their religious heritage to each other. Have you ever heard a Jew say that this Christian or Muslim is derived from our Judaism, so he is Jewish???

Or has any Christian ever said that all Muslims are Christians???

Now let’s go further, these three religions came from the same lineage, whose ancestor was Hazrat Abraham and till Hazrat Mohammad, all the prophets are mentioned in the scriptures of all the three religions, whether it is

Torah, Bible, or Quran, but the way and beliefs are different. So today, it is known differently.

But why do the people of Hindutva have to say that Sikh is a Hindu? What is their compulsion???

The first step of any religion starts with following its traditions, beliefs, and texts; the same is also written in the Vedas and Upanishads.

The fact is that all this political propaganda came into existence after the Hindutva Agenda. This is because common Hindus were so ignorant to such bigotry and always had allowed everyone to have faith according to one’s own choice. This Sikh Vs Hindu debate has appeared ever since the Political Parties has started to divide communities to fetch more votes.

Now would a person want to go back to his old identity, i.e., monkey life?? Would any human want to be a monkey again??

The answer will be no!!!

Now no human will become a monkey, then why should a Sikh become a Hindu by erasing his unique and outstanding identity, brother.

Here we clarify that beautiful sects have come into existence and gone in Sanatana Mata. The narrow-minded Brahmins (not all) distorted the knowledge of ancient sages and did not allow it to reach the common person, due to which hypocrisy spread among the people. Now, if a Mahapurush came to reveal the truth, people became attached to his words; why would someone claim that He belongs to us? Every old Idea should respect the new; whatever is best among them comes to the limelight according to their values and virtues.

Example of Milk and Ghee

Butter is made by churning milk, and then ghee is made by heating butter. But can ghee ever be converted to butter or butter back to milk???

The answer is no.

Now the Khalsa was decorated like pure ghee; Guru Gobind Singh Ji had churned the whole country. Guru Sahib Ji made people of different provinces and castes take Khande Baate Da Amrit from all over India and then revealed the Khalsa Panth like pure ghee. Khalsa is the one who only accepts the Akal_Purakh or One Almighty as True God, (Many Hindus believe in that too) and not in Trinity of Brahma-Vishnu-Siva. The tradition of Saints and Soldiers through Amrit (Baptization) is only of its kind and exists in Sikhism only.

Some misguided people keep raising this point repeatedly that words like Ram, Krishna or Murar, Gobind have come in Sri Guru Granth Sahib Ji, they belong to Hindu gods, so in this way, it is proved that Sikh is also a Hindu which is absurd and stupid.

These names were used for an almighty god and were more prevalent in that period. Many Bhagats also mention Khuda and Allah in their Baani. Would that make every Sikh a Muslim too? Ancient Sanatana Grants like Gita, Ramayana, Bhagwat Purana are available in abundance in Gurmukhi script. Many Gursikhs read them with all their love because Guru Gobind Singh Ji preached to take Vidya from all religions but do not have faith in them. We are ordered to take what our Guru says. Reading Sanatana scriptures can convert anyone to Hinduism?

Praise of the One God using the name of other gods and incarnations cannot be considered a sense of their worship; if it is believed so, then did all the three religions of the West, Judaism, Christianity, and Islam become one???

In the end, we want to say that we Sikh is a separate community and Khalsa Panth is a unique and a separate sect far from Brahminical taxon and we don’t need to get any certificate from anyone about it. Again I want to clarify this article is not for Hindu Brothers who have high religious values, but for those mischiefs who keep blabbering Sikh vs Hindu here and there and are puppets of false Hindutva Agenda.

Ans. No, Sikhs do not worship Hindu gods, but they revere all incarnations of Almighty that happened to protect Bhagats. e.g., God protected Bhagat Prahlaad from his father Hiranyakashyipu, incarnating as Narsimha.

Question. Can a Sikh marry a Hindu?


Ans. A Sikh does not believe in anycast, so a Sehajdhaari Sikh is free to marry anyone. But a Khalsa is required to marry a Khalsa woman, doesn’t matter what caste she had in the past. Also, there are debatable hukamnama that promotes marriages in the recognized family holding Kul-Maryada for better understanding and happy life without clash of faiths.

Question. How to become Sikh from Hindu?

Ans. Guru Ji preached to everyone to be firm in their beliefs. But if that could have followed, there shouldn’t have been so many Sikhs around. When someone finds so attached to a message, they eventually feel the need to follow him with entire devotion. Anyone can come to Rehat of Guru with a conscious understanding of Gurbani. If someone feels blissful, he may live as is, but to become part of the Panth, He/She will have to initiate himself taking Amrit from 5 Singh Sahibs (Panj Pyaare).

First of All, Sikhs are not foreigners; their Ancestors had followed the same traditions from so long. Then What is the difference? A Gursikh celebrates Diwali every day because he is enlightened with the true name and celebrates Holi every day because he has been colored with the ‘Color of love’ of Waheguru. Taking it to traditional festivals, Sikhs celebrates “Bandi Chhod Divas” in place of Diwali and “Hola Mohalla” instead of Holi. If Sikhs celebrate Diwali and Holi with Hindus, this is a positive thing for the Universal message of Brotherhood. Nothing is wrong with celebrating festivals of other faiths unless they are harming your religious values.

Very logical explanation to clarify the doubts. Many grammatical mistakes.