The year 1581 was a year of both joy and sadness for the Sikhs. They had gained a meritorious and saintly Guru in Guru Arjan, but they had also lost their beloved Guru Ram Das.

Guru Ram Das had been aware for quite some time that his end was nearing, and so he placed Guru Arjan on the throne when he felt that the time was right. Though Prithi Chand constantly created problems the people stood by and applauded the choice made by Guru Ram Das.

But Prithi Chand was not to be silenced like this. He began to raise a public outcry against Arjan’s installation on the Guru’s throne. He not only accused his father of favoritism but even tried to organize a rebellion against him by getting a few people on his side. The people, however, were unaffected and paid no heed to his rantings. Prithi Chand not only pointed fingers at his father but also made it difficult for Arjan. Though Arjan took it all very calmly, Guru Ram Das could not bear it for long. When he crossed all limits, Guru Ram Das publicly condemned him and announced that no one who was so arrogant, proud, and conniving, could be a part of his community.

Seeing the growing rift between the father and son, Arjan requested his father to hand over the throne to Prithi Chand. At this, Guru Ram Das assured him that he had made him the Guru not because he was his favorite son, but because he deserved it due to his dedication, and his sincere efforts to carry on the work of Guru Nanak.

Soon after, Guru Ram Das began feeling more and more unwell and realized that his end was near. He was very depressed and regretted the fact that he could not complete the task of constructing the holy tank as Guru Amardas had wanted. Gurudev knew that God had some reason for taking him away so early in life. He was only forty-seven years old, and he felt he had still a lot to do. But then, he finally resigned to his fate as God’s wish. He was satisfied that he had at least passed on the flame of Guru Nanak to Guru Arjan, who was as worthy of the throne as all his predecessors had been.

With that responsibility having been fulfilled Guru Ram Das decided that he could leave his earthly abode. Soon after, he sent for his family and all of the Sikh community. He expressed his sincere love for them and blessed everyone from children to the aged.

Finally, with the name of God on his lips, he left the world of mortals. It was September 1, 1581, and yet another glorious chapter came to an end in the history of the Sikh religion, heralding a new one in the form of Guru Ram Das’s son and successor, Guru Arjan. Guru Ram Dass was forty-seven years old when he left this world. The period of his Guruship was brief. He had been the fourth Guru for barely seven years. When the devotees and the members of the family found that the reverend Guru had left them, they asked the Dhadis to recite the hymns. As the Guru had advised, no one wept on that occasion. All accepted the Will of God happily. The next day the body of the Guru was cremated on the bank of the river Beas.

In order to perform the last rites, they stayed at Goindwal for more days. According to the prevalent custom, a turban is offered by the maternal parents to the father’s successor. When the maternal uncle of Guru Arjan Dev, Baba Mohri invested Guru Arjan Dev with the turban, Prithi Chand objected to it. But when Guru Arjan Dev came to know about it, he at once presented the turban to him. The next day with his family he left Goindwal and reached Amritsar.

We shall conclude the article with this beautiful Punjabi poem by Lala Dhani Ram Chatrik titled “Guru Ramdas Ji”:

Lets remember the Guru, Dhan Dhan Sri Guru Ramdas Ji on his Joti Jot Gurpurab. Still Living through his hymns, He was a Supreme Poet, and Constructor known for founding the holy city of Amritsar. 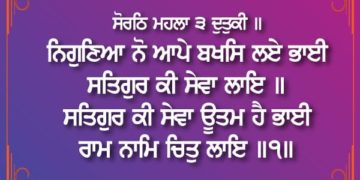