2022 Marks the 183rd Maharaja Ranjit Singh Barsi ( Death Anniversary ). Best ever King of the Sovereign nation of Punjab, He is known as the ‘Lion of Punjab’ or ‘Sher-e-Punjab’.

Maharaja Ranjit Singh was one such person who arrested the ever-increasing decline of Punjab. He ruled on the minds of Hindus, Muslims, and Sikhs alike. He established a reign of peace and removed the fear of invaders from the minds of the population.

Maharaja Ranjit Singh was born on 13th November 1780 at Gujranwala in the house of S. Mahan Singh Shukarchakia and Mai Raj Kaur. Mai Raj Kaur was the daughter of the king of Jind.

As a man, warrior, general, conqueror, administrator, ruler, and diplomat, Ranjit Singh occupies a high position among the greatest sovereigns of the world. He was not a despot who enforced his will regardless of the interests or feelings of others. He was one of the best rulers in Indian history. According to his earliest biographer, Sir Lepel Griffin “undoubtedly puts his name among the great leaders of men from Julius Caesar down to Napoleon Bonaparte”.

You can download the HD Graphic on Sher-e-Punjab Maharaja Ranjit Singh Barsi ( Death Anniversary ) 2022 Image using the download button given below: 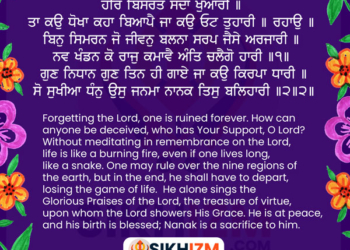