Home » 120+ QAs to Enhance your knowing about Sikhism

120+ QAs to Enhance your knowing about Sikhism

We have prepared a set of more than 100 question answers to increase the awareness about Sikhi. 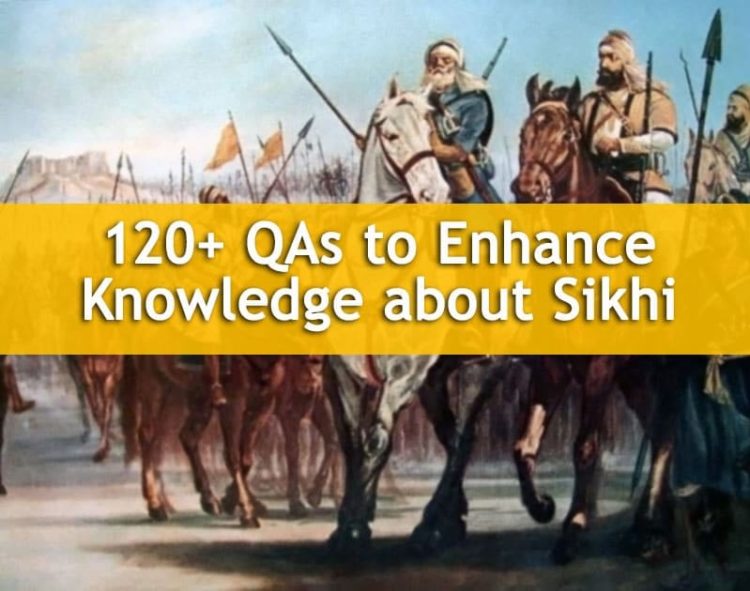 Q. 4 Where and when was the marriage of Guru Nank Dev Ji solemnised?
Ans. The marriage of Shri Guru Nanak Dev Ji was solemnised at Batala in Samvat 1544 Bikrami, 24th of Jeth, A.D. 1487.

Q. 9 Which “Bani” was written by Guru Nanak Dev Ji ?
Ans. Guru Nanak Dev Ji wrote “Bani” in twenty Ragas. In addition to Japji Sahib , some shlokas in Sanskrit and some other shlokas are written in the Adi Shri Grnnth Sahib.

Q. 16 Why didn’t Guru Angad Dev Ji appoint in succession his own sons?
Ans. Because his sons did not obey His order.

Q. 21 Which method was preached by Guru Angad Dev Ji for seeking spiritual knowledge(the ultimate truth)?
Ans. Guru Angad Dev Ji preached people to give up the Idol-worship, live in Satguru’s shelter , get Naam from the living Satguru and meditate upon it according to His guidelines.

Q. 25 What arrangements did Guru Amar Das Ji make to spread Guru Nanak Dev’s message to every home ?
Ans. Twenty two preachers were deputed for this job. His Holiness also ordered to celebrate Baisakhi Mela every year at Govindwal in Punjab.

Q. 50 Whose “Bani” has been included in the Adi Granth?
Ans. The Adi Granth contains the Bani of Six Sikh Gurus, 15 Saints, 11 Bhatt poets and 4 Hazoori Raagis of Sri Satguru Ji.

Q. 51 What physical tortures were given to Guru Arjan Dev Ji?
Ans. He was made to sit in boiling water . After that, he was made to sit on a hot iron plate while hot sand was simultaneously poured on His head and lastly, he was ordered to be sewn in kine-skin. Sikh History l 8

Q. 56 Which change was made by Guru Hargobind Sahib in Guru Nanak’s Maryada ?
Ans. In addition to Nam Simran, Guru Hargobind Sahib Ji ordered the Sikhs to become warriors and fighters so that war against cruelty may be fought. He wore two swords, one of temporal and the second one of spiritual supremacy.

Q. 57 Why is Guru Hargobind Sahib known as ‘Prisoner- Reliever’ ?
Ans. Because at the time of His release from Gwaliar Fort as a prisoner, He got other 52 jailed kings (of BaiDhaar) released along with Him.

Q. 72 Which line of Gurbani, was reversed by Ram Rai ?
Ans. Being afraid of Aurangzeb, Ram Rai had reversed the line “Mitti Muslman Ki” to “Mitti Be-iman ki”.

Q. 76 Which miracles did Guru Harkrishan Ji perform, while going to Delhi?
Ans. Some of the miracles performed are as follows: To break the false pride of Pundits at Kurukshetra, Guru Ji had put a stick on the head of a humble illiterate person who recited the meanings of Gita to the pundits. Guru Har Krishan Ji ordered to take His Charanamrit whosoever wanted to get rid of cholera during the outbreak of this epidemic in Delhi and , in this way, many lives were saved.

Q. 78 Which order was passed by Guru Har Krishan Ji, for the 9th Guru before passing away ?
Ans “Baba basai gram Bakaley” which meant that the ninth Guru, Guru Tegh Bahadur Ji lived in a village named Bakala.

Q. 81 When did Guru Tegh Bahadur Ji visit Bakala village and for how long did he stay there?
Ans. By the order of His father Guru Hargobind Ji, Shri Guru Teg Bahadur Ji, along with His mother went to Bakala in Vikrami Samvat 1701, and stayed there for twenty years.

Q. 83 Who had traced Guru Tegh Bahadur Ji during his long stay (meditation period) in Bakala?
Ans. Makhan Shah Lubana was an overseas merchant. Once, while on a voyage, when his ship began to sink due to a tempest in the sea; Makhan Shah promised to give 500 gold coins to the true Guru who will save his ship. Since his ship was saved, he started searching the true Guru. When he came to Bakala, he found that 22 persons were claiming themselves to be the Guru. So he began his search by offering 5 gold coins to each claiment. When he came to Guru Teg Bahadur, He asked him the reason for offering only 5 gold coins instead of 500. Upon this, Makhan Shah 15 became hilarious and spread the news by yelling and openly declaring in Bakala that the true Guru had been found.

Q. 84 Who was Makhan Shah Lubana ?
Ans. He was a businessman, whose sinking ship was rescued by virtue of his prayer to the living Guru of that time.

Q. 85 Write, in detail, the incident pertaining to the Adi Granth Sahib at the time of leaving Baba Bakala ?
Ans. Shri Guru Tegh Bahdur Ji wished to hand over the Granth Sahib to Dhirmall. Since they could not meet in person, Guru Ji placed the Granth Sahib in the river Beas and sent a message to Dhirmall. After getting this message, Dhirmall alongwith some experienced divers came and tried his level best but he could not succeed in recovering the Granth Sahib. Then a Sikh advised him to pray to the Guru of the Time (Guru Teg Bahadur Ji) in order to be successful. So when Dhirmall did so, he succeded in recovering the Granth Sahib. This meant that the contemporary Guru is the Master of the Time and He alone can help in all odd situations and answers genuine prayers.

Q. 88 Where did Guru Tegh Bahadur Ji go to preach during his tenure as a Guru?
Ans. He went to preach in Malwa, to Dhaka, to Calcutta, Jagan Nath Puri, Patna, Benaras, Nanak Matta, Delhi and Haridwar.

Q. 89 Give detailed information about the cruelities inflicted on the Hindus by Aurangzeb ?
Ans. Aurangzeb had become the emperor after imprisoning his father and murdering his brothers. He was determined to make India a Muslim State. He had doubled the octroi-charge for Hindus in comparison to Muslims. He had dismantled the temples of Mathurn, Benaras and Gujrat. He had put restriction on the Hindu festivals of Holi and Diwali. Burning of dead bodies on the river banks was not allowed. Hindus were not allowed to sit in Palkies and on Irani horses. Any Hindu culprit was set free if he became a Muslim.

Q. 91 Give a brief sketch about the life of Guru Tegh Bahadur Ji?
Ans. For nearly 23 years He remained with His father Guru Hargobind Sahib Ji and for 20 years, He worshipped God deeply and extensively. He remained Guru for 10 years, seven months and 18 days. He lived for 54 years 4 months and seven days.

Q. 92 When did Guru Tegh Bahadur go to Amritsar to pay his obeisance at the Harimandir Sahib? What was the behavior of the management of the Golden Temple ?
17 Ans. They had locked the doors of the Harimandir Sahib fearing the seizure of the temple and termination of their rich source of earnings.

Q. 93 What was the original name of Anand Pur Sahib, When and how was it built ?
Ans. Its land was purchased by Shri Guru Tegh Bahadur Ji. Its first name was Chakk Nanaki. Its foundation stone was laid by Baba Gurditta Ji on 21st of Aasharh, Vikrami Samvat 1722 , June 19 1665 A.D. The Kesh Garh Fort was built by Guru Gobind Singh Ji. It was then named Anand Pur Sahib.

Q. 96 Give details of the Gurbani written by Guru Tegh Bahadur Ji?
Ans. He wrote 59 Dupadas, and Tipadas in Raga form. In addition to this , He had written 57 Slokas which were included in the Adi Granth on pages 1426 to 1430. 18

Q.100 Why did Guru Tegh Bahadur Ji become a martyr?
Ans. To save Hindus and Hindustan from the crueli- ties of the Mughal Emperor Aurangzeb

Q.105 When and where did Guru Gobind Singh Ji establish the Khalsa Panth?
Ans. In Vikrami Samvat 1756, 1699 A.D. in Anand Pur Sahib on the day of Baisakhi, the Khalsa Panth was established at Anandpur Sahib.

Q.109 When was the ‘Battle of Bhangani’ fought?
Ans. At Bhangani (16 miles away from Paunta Sahib) a battle took place between Guru Gobind Singh and the Mughal Army in 1686 A.D. (Vikrami Samvat 1743)

Q.112 When and between whom was the ‘Battle of Hussaini’ fought?
Ans. A battle took place between Hussain Khan and Guru Gobind Singh Ji in Anandpur Sahib in 1693 A.D.

Q.114 What reason did Guru Gobind Singh Ji give to Pandit Keshav Nath for performing the Havan ?
Ans. Guru Gobind singh Ji said “The Havan will purify the atmosphere, put an end to evil deeds, all human sufferings and famine. In this atmosphere great warriors will be born. It will lead to the spread of religion everywhere”.

Q.115 Who said these words and when – “This sword of mine, demands a sacrifice, Is there anyone who will quench its thirst?”

Ans. Guru Gobind Singh Ji said these words while addressing the Sangat (Congregation) in Anandpur Sahib on the Baisakhi day of 1756 Samvat. 1699 A.D.

Q.116 When did Guru Gobind Singh Ji leave the fort of Anandpur Sahib?
Ans. He left the fort on 20th December, 1704 A.D. along with His four sons. Mata Sundri Ji, Mata Gujjari Ji and some 500 Sikhs.

Q.117 “Neel baster le kapre phare turk Pathani amal gaya”. Give a brief description of this line ascribed to Guru Gobind Singh.
Ans. Due to the blood thirsty pursuit of the Mughal Army, Guru Gobind Singh Ji had disguised himself as “Ucch Da Peer” by wearing black clothes and was able to get away from Machhiwara. Then at Dhiliuan, He met Sodhi Kaul Rai who gave white clothes to Guru Ji and requested Him to wear the white clothes. After doing so, Guru Ji had tom apart and burnt the black clothes and uttered this line. When Sodhi Kaul Rai Ji reminded Him that this was not the original couplet (as sung by Guru Nanak in Assa Di Vaar) , then Guru ji answered him “Guru sahayo hum Sarbans Gaar. Tuk paltai hit upkaar” i.e. For changing this couplet I have sacrificed my whole family, or seven heads ( of the 5th, 7th & 9th Guru plus his four sons).

Q.118 Give information about Banda Bahadur.
Ans. Banda Bahadur Ji was born in 1670 A.D. (Katak Sudi 13 Vikrami Samvat 1727) in Rajauri (Jammu).He had become very sad when he saw some hunted animals dying. After that, he gave up hunting/ killing and became a pure vegeterian. His original name was Madho Dass. In Vikrami Samvat 1764-65 (1707-1708 A.D.) Sri Guru Gobind Singh Ji went to his place on the bank of the river Godawari, converted him into a saint- soldier and named him Banda Bahadur. On the orders of Guru Gobind Singh, he came to the Punjab. He fought and won many battles. Then differences arose between him and the Sikhs. He took revenge of the two younger sons of Guru Gobind Singh whom the Muslim Governor of Sirhind (Nawab Wazir Khan) had killed in cold blood. Banda had conquered many places. But at last, in Vikrami Samvat 1773 (1716 22 A.D.) he, along with his 700 companions, was brutally murdered in Delhi by the order of then Mughal Emperor Farkhusiar.

Q.120 How were younger Sahibzadas martyred?
Ans. They were martyred by bricking them alive in a wall i.e. they were made to stand and a wall was erected around them and were, later, beheaded. 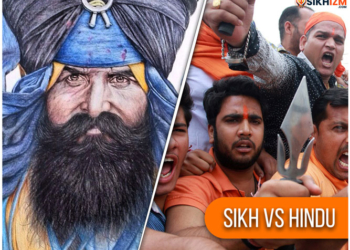 Sikh vs Hindu | Difference between Sikhism and Hinduism? 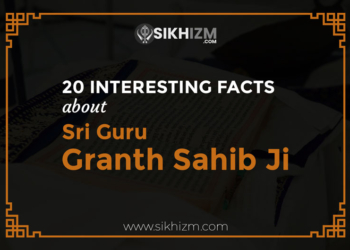 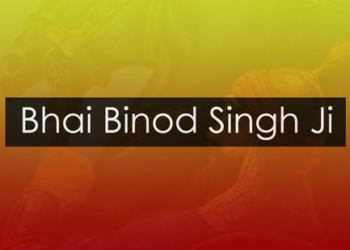 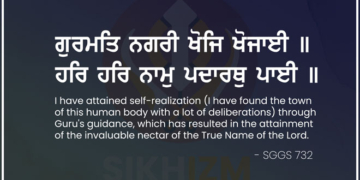 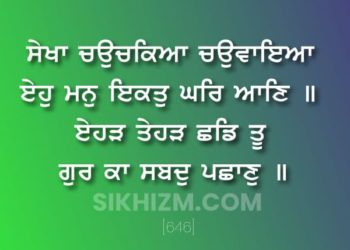 Qualities of a Gurmukh by Guru Amar Dass