Guru Arjan Dev Ji compiled the Adi Granth or Pothi Sahib, completed the construction of Harmandir Sahib, and became the first martyr in the Sikh Tradition.

The youngest son of Guru Ram Diis, a poet of great excellence, a philosopher in his own right, a builder and great organizer, and the first martyr in Sikh history-this was Guru Arjun. Even in his early years, he showed signs of great promise, faithfulness to the ideals, and a balanced mind towards his detractors, one of whom was his eldest brother, Prithi Chand, who did his worst to harm him in order to usurp the Throne, but who was paid back in nothing but forgiveness and charity. The other brother of Guru Arjun, Mahadev, was a recluse and was hence considered unfit to succeed his father.

Though Sikhs stood by Guru Arjun and sent in their offerings to him from far and near, these would hardly reach the Guru for they were intercepted on the way by Prithi Chand, even though the Guru had already assigned all income from the house property to his name and for himself and the community kitchen, he depended only on the offerings of the faithful.

To safeguard against it, the Guru appointed some of his trusted Sikhs in various places to collect the offerings from the faithful, who were required from now on to set apart one-tenth of their incomes for communal purposes. These collections were to be offered to the Guru on the day of Baisiikhi each year by the Masands (or Agents of the Guru).

In the heart of the city of Amritsar, Guru Arjun built a temple, now· popularly known as the Golden ~ Temple, open on four sides to signify that it was open to men of all the four castes and to men from all el the four directions of the world. It is said, he asked a Muslim Sufi saint, Mian Mir, to lay its foundation stone. Later, the Guru built the cities of Tam Taaran and Kartiirpur, now in the districts of Amritsar and Jullundur respectively. Round the temples at all these pla~s, the Guru dug up huge tanks for people to bathe, in and keep themselves meticulously clean.

When in 1595, a son was born to Guru Arjun, Prithi Chand, who was hoping that the Guru being childless, the Throne would pass on to him or to his son, started indulging in even viler intrigues. At first, he tried to poison the Guru’s son, but failing in this he joined hands with a Muslim governor ‘of Jullundur, Sulhi Khan, and incited him to attack him. But Sulhi died in most tragic circumstances much to the great chagrin of Prithi Chand. Similarly, when one of Akbar’s ministers, Bir Bal, imposed a tax on the Khatris of Lahore, and they led by the Guru, refused to pay it, Bir Bal threatened an armed attack. But it never matured, for Bir Bal was killed in another expedition. The Guru now settled down to a life of comparative peace and compiled the GURU-GRANTH to make the Sikhs, men of the BOOK. He had already given them a central place of worship, the Golden Temple, organized Sangats (congregations) under the Masands more effectively than before, and made it obligatory for Sikhs to part with the tithe in favor of the Whole community. This not only perfected the organization of the faith in every way but also gave Sikhs an idea, of peoplehood.

Meanwhile, Jahangir, the Moghal emperor of Delhi, was hearing reports of the growing influence of the Guru not only among the Hindus but also among the Muslims. Earlier, when a report was lodged with Akbar that the Guru had compiled a Book in which the Muslim faith had been reviled, he had asked the Book to be read out to him when he visited the Guru at Govindwal in 1598, and when this was done, he was immensely pleased and satisfied that the Guru had a mission of synthesis rather than conflict and exclusiveness. But Jahangir was made of a different texture.

In these days, his son, Khusrau, rebelled against him, and in his flight towards Kabul, he called on the Guru, and, as is customary on such occasions the Guru blest him. But it was reported to Jahangir that the Guru had offered him monetary assistance and even applied a saffron mark on his forehead to bless him in his fight against the Emperor. So, Jahangir believed in the report and also wanted to get rid of a person whose authority was growing, (as he himself admits in his autobiography, the Tuzak-i-Jahangiri, p. 3SJ ordered that the Guru be arrested, his property confiscated to the State and he be made over to Murtaza Khan, his Kotwal in Lahore, to be tortured to death.

The Emperor’s orders were carried out and the Guru died a martyr at Lahore on May 30, 1606. 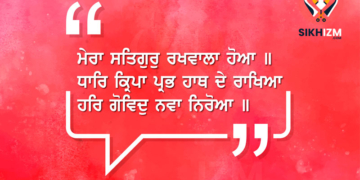 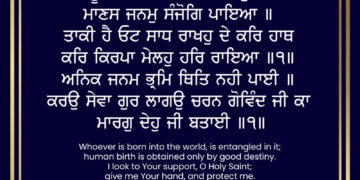